My 4-year-old was just diagnosed with Separation Anxiety Disorder. What is it?

You may already have guessed from the name of the diagnosis that separation anxiety disorder has something to do with the anxiety a child feels when separated from parents or caregivers. It occurs in its worst form when a child reaches school age, but it can be a source of difficulties with babysitters or daycare providers at younger ages. Sometimes, but not always, a precipitating event occurs to trigger these symptoms. This can be a trauma, an illness or operation (particularly if the child is separated from her parents), a move to a new house, or the loss of a pet or loved one.

Adam, a seven-year-old who I treated, lost his grandfather at age six when he was in kindergarten. At first, he just complained about going to school because he “missed Papa.” Then he started resisting walking to the bus stop, and his mom began driving him to school and walking him into the classroom. Once they arrived at school, Adam would whimper and cling to his mother. After much prodding from his mother, teacher, and sometimes even the school psychologist, he would manage to make it into the classroom but then would frequently ask to go the nurse’s office because of headaches or stomach-aches. There, he would explain to the nurse that he felt so sick that he “needed to go home.” These behaviors were interfering with his ability to function at school. Even when he was in the classroom, he was often worried about his parent’s safety, thinking things might be going wrong at home. Adam did, however, respond quite well to CBT treatment and by the middle of 1st grade, he was getting on the bus without any difficulty.

Adam’s behavior is typical for many children with Separation Anxiety Disorder (SAD). There are certain ages at which children are most susceptible to SAD: kindergarten, the beginning of junior high (around 11 years), and puberty (13-14 years). Younger children with SAD, such as a four-year-old, tend to be excessive in their need for parental attention. They may cling to their parents during the day and want to sleep in their parents’ bed at night. Older children with SAD tend to fear new situations and they may feign illness or throw a tantrum when their parent leaves. Some children may also become quite dramatic and even threaten acts of self-harm, although it is relatively rare for children with SAD to act on these impulses. Understandably, parents of children with SAD can feel highly distressed by these symptoms.

In order to receive a diagnosis of SAD, a child must display three or more of the following behaviors. These behaviors must cause excessive anxiety and be developmentally inappropriate for the child’s age. 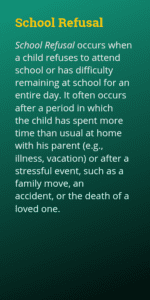 Click on this image to read more about school refusal.

School Refusal occurs when a child refuses to attend school or has difficulty remaining at school for an entire day. It often occurs after a period in which the child has spent more time than usual at home with his parent (e.g., illness, vacation) or after a stressful event, such as a family move, an accident, or the death of a loved one. For many children, school refusal is really “just” separation anxiety in that the child does not want to leave the parent, although school refusal can occur for other reasons. Most children with school refusal do not have a learning disability or problems with academics that would cause them to dislike school. They may have fears of being bullied by peers, facing criticism from teachers, or failing, but often these fears have little basis in reality (though of, course, they should be thoroughly ruled-out). Treatment is extremely important as the long-term consequences, such as academic or social problems, can be severe. Treatment usually emphasizes an immediate return to school using cognitive behavioral techniques, sometimes in combination with medication (anti-anxiety or antidepressant medications).