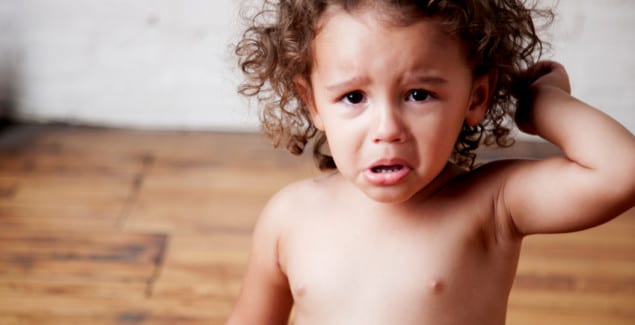 Sarah sits on the couch, clutching her stuffed bear. Her finger nails are visibly torn; they’ve been bleeding again.

Her mom, meanwhile, is calling into work again. She’ll have to explain for what feels like the zillionth time that she’ll be late. It’s not clear her boss will understand this awful situation much longer. After all, most 8-year-olds don’t have a problem going to third grade; it’s usually a good year for kids.

But not for Sarah.

As Sarah approaches school, she begins to panic. Today her mom had to literally drag her in, and as she did, Sarah grabbed onto a door frame, tearing her finger nails loose as her mother and teacher attempted to extract her.

It wasn’t the first time.

What makes matters worse is how bad this feels.  No mother wants to hurt her daughter.  Sarah’s mom feels like an ogre at the start of every day. She wonders if other parents have this problem? Is there even a name for it?

What Is Separation Anxiety?

Parents call it a nightmare.

Separation anxiety is normal for all young children. Think of it as a kind of survival instinct. Humans, especially helpless humans, require attachment to parental figures who provide them proximity, warmth, care and protection. Awareness of this necessary relationship is hard-wired, and originates in the most primitive parts of our brains. As infants grow and their brains develop, they become increasingly sophisticated in their relationships with “attachment figures.” That’s why parents are called attachment figures; infants and toddlers attach their darkest fears to the biologically-driven recognition that their parents can make those fears go away. They think of their parents as a kind of force field.  Importantly, this is entirely normal—up to a point.

When Does Normal Separation Anxiety Become A Problem?

Let’s look at separation from a typical developmental perspective. Then we can compare this perspective to what Sarah’s experiencing.

As parents, we know that we can pass a young infant around the room to total strangers and the child will be utterly at ease. However, at about 9 months, that baby has usually had enough. The 9-month-old infant looks at a strange face and bursts into tears, desperately reaching for Mom or Dad.

At 9 months, most babies begin to recognize the difference between a familiar parental face and an unknown person. Experts in human development call this stranger anxiety, and it’s one of many normal landmarks in the child’s developing attachment system. The child’s brain has constructed a mental representation of a parent, and can distinguish Mom and Dad from someone else. This is a wonderfully practical evolutionary and protective development.

In fact, it’s this recognition that propels 1-year-olds to begin exploring the world on their own. Yes, they’re more mobile at this age, but they’re also more secure in knowing that their parents will rescue them if needed. Having experienced, trusted parents, they can afford to feel safe enough to venture into the unknown. This is why we need to keep such a close eye on them—they seem fearless, which can lead to all sorts of trouble.

But in the second year of life, the free-wheeling explorations end, and we witness instead the infamous “terrible twos.” Toddlers cling, are more demanding and frequently refuse to play by themselves. Paradoxically, this developmental achievement represents an evolutionary step forward. Children at this age now have the capacity to realize that there is a separate and potentially dangerous world from which they need protection. This is part of the normal process of insuring safety and security.

As kids grow and their brains further develop, we see an increasing tension between the drive for autonomy and the fear of separation. Remember that some separation anxiety is completely normal and expected. When 3- to 4-year-olds are afraid to go to bed alone at night, or 5-year-olds become anxious when Mom and Dad go out and leave them with a babysitter, we see a normal response to the broadening sense of the risks in the outside world. We often see this particularly when a young child starts school. This kind of anxiety is very common in preschool, kindergarten and first grade.

But, some kids can simply not tolerate separation at all. They cannot bear sleeping alone, going on play dates, or attending school. In these situations, separation is experienced as a life-threatening event. Their inborn fight or flight response is triggered, but not when it should be—not at a time of real or imminent danger—but rather, at a time of any separation. It’s as if their anxiety “thermostat” is malfunctioning.

We all know the fight or flight response. When we feel threatened, we experience a state of heightened arousal and panic. We endure feelings of impending doom. Our heart rate and breathing increases. We might even become tremulous or dizzy. In short, we feel the chemical rush of adrenaline that is preparing us to escape danger.

Separation anxiety disorder (SAD) is the childhood condition in which virtually any detachment from a parent is experienced as a life-threatening danger. It’s a state of true, yet unwarranted, panic. When faced with separating from their parents, there is virtually nothing that can calm these children down. Their thoughts and feelings turn inevitably to worries of serious harm coming to their parents, and in their minds, this separation leads to the worse kind of loss. They fear they’ll be terrifyingly alone and unprotected. Only their parents’ presence reassures them.

When kids like Sarah are sent to school, they experience the physical aspects of panic, and are consumed by the fear of losing their mom or dad. They often become obsessed with the belief that something terrible will happen to their parents. Typically, kids with milder forms of this problem calm down once they’re in the classroom. For these children, the crisis manifests only at the time of separation. For others, there is nothing that brings relief except their reuniting with the parent. Children with SAD are often oppositional, are prone to temper tantrums and wreak all sorts of emotional havoc. In their view of the world, this havoc far exceeds the risks of being parentless for a few hours.

How Common Is Separation Anxiety Disorder?

SAD is relatively rare, affecting only about 4% of children. Still, it accounts for almost 50% of referrals for the treatment of anxiety disorders. It has a very negative impact on the child and parents. For the child, besides being riddled with terror, SAD can result in academic decline, isolation from peers and increasing worries about the next period of separation. Hobbies, recreational activities and the ability to relax and play may be impaired. For parents, on the other hand, it can involve the loss of work, poor sleep, reduced time with friends and partners and certainly feelings of desperation.

SAD often runs in families, and can be associated with the development of other anxiety disorders or depression in adolescence and adulthood. In addition, many parents inadvertently reinforce SAD by acting in an over-protective, controlling and/or anxious way during times of separation. This is not to say parents “cause” SAD, but loving, dutiful parents might not realize that their own worries are actually reinforcing those of their anxious child.

The good news is that SAD responds readily to the right interventions.

Here are some basic guidelines:

While SAD in its most dramatic form (as we’ve seen in Sarah’s case) may be intolerable for parents and children, it’s also amenable to treatment. With a consistent, diligent and thoughtful approach, Sarah’s fingernails will heal, and soon enough she’ll start marching into school with confidence.

Q+A: Should I be nervous? My preschooler’s teacher recommended I have him evaluated for an anxiety disorder..

Reducing Stress for You and Your Baby