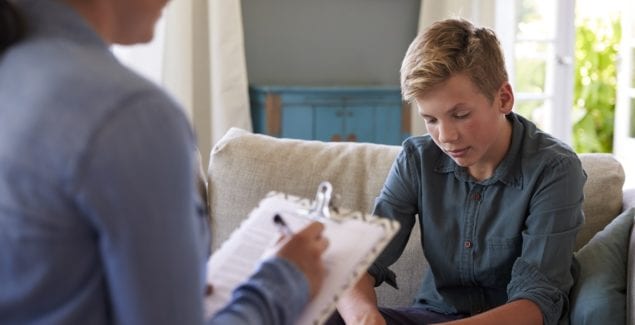 Posted in: Parenting Concerns, Stress, You & Your Family

Jenny was a 15-year-old high school sophomore who had suffered from depression for six months. Her pediatrician referred her to a psychiatrist, who prescribed Prozac for her depressive symptoms. However, the psychiatrist thought she might also benefit from Cognitive-Behavior Therapy  (CBT) because of the research showing that cognitive therapy used along with medication is more effective than either one alone.

When Jenny first arrived in her psychiatrist’s  office, she was irritable, thought “life isn’t worth living,” stopped doing things she used to enjoy, and had negative thoughts about herself and her life. Jenny was much harder on herself than she was on other people. When asked about friends, she answered, “I don’t have any because I just don’t fit in with those mean girls.” When asked about what kinds of plans she had after college, she replied, “High school sucks, and college will probably be worse. What’s the use?”

Jenny’s pediatrician recommended a CBT approach because it has been found to be helpful for many disorders in children, including depression. CBT views psychological issues as the result of faulty thought patterns, learning challenges, and environmental experiences. The underlying idea is that the way children and adolescents think about their environment determines how they will react to it. The major goals of CBT treatment are to identify dysfunctional thoughts (or cognitions) and replace them with more flexible ones. This can help to teach children better coping strategies, as well as how to be aware of and regulate their own behavior. Using a cognitive-behavioral approach, Jenny’s therapist would help her learn to think positively and use more effective social skills and coping strategies.

CBT is a highly collaborative therapy in which the child and therapist together try to understand the problems the child is having and create a plan for changing them. This therapy is not just focused on talking about problems – it’s focused on doing something about them. As noted above, a key part of CBT is that what we think about how our experiences impact how we feel about ourselves and our situation. CBT provides a way for children to closely examine and change faulty interpretations of the experiences causing them trouble. It’s not just about positive thinking, but a way of rethinking.

Let’s see how this plays out in Jenny’s case.

The beginning of therapy focused on assessing Jenny’s difficulties. The therapist also spent quite a bit of time talking to Jenny’s parents as well. During the assessment phase of therapy, the therapist wanted to find out what the problem behaviors were, when they occurred, where they occurred, and how often they occurred. In Jenny’s case, the problem behavior was a constantly depressed mood that she most acutely felt when she was in school. Jenny’s therapist had her keep a record of the thoughts she was having, along with the behaviors and feelings that were present. Jenny was happy to record this on her iPhone. Once she was able to record the situations, thoughts, and feelings that went along with her moodiness, she was able to look for patterns in her thinking. For example, Jenny attended a private school, but she saw herself as a more “independent-thinking, artistic” student who didn’t fit into the “preppy perfect-student” environment. Instead of embracing that difference, she developed the idea that she was “less than” the other students and called herself a “loser.” She began to isolate herself and did not join any extracurricular activities. Because of this, she had no opportunities to make new friendships with other similar students, which might have led her to challenge how she thought about herself. The fact that “no one called [her] to hang out” only reinforced her belief that she was a loser.

Jenny was able to break this cycle of isolation and self-loathing because her therapist helped her recognize and correct the errors in her thinking. This is a process called cognitive restructuring – in other words, Jenny learned to rebuild the ways she was thinking about herself and her environment. Some of this was done within the weekly one-hour therapy session, and some was done through homework assignments. Homework is an important component of CBT treatment, as the therapy assumes that what happens between sessions is just as important as what happens during those sessions where the therapist is able to challenge Jenny’s beliefs. For example, when Jenny said something like, “I’m a complete failure,” the therapist would examine whether that was true or false by looking at the evidence for it. Some of these were clearly false, while others such as, “My math teacher doesn’t like me,” were somewhat true, and it was helpful for Jenny to see the difference between the two. In addition, the therapist also asked Jenny to make a daily schedule so that she would start to get out of the house. Over time, her depressive symptoms started to lessen as her therapist helped her observe each positive day or experience as building blocks that energized her toward her goals.

Cognitive-behavioral techniques can be used to treat many disorders, ranging from mild problems to developmental difficulties to even more significant problems. It is a widely studied and highly effective treatment that can be used either alone, typically by a therapist who has specific training in CBT, or together with other therapies and/or medication as part of a larger treatment plan. The common thread to the treatment strategy no matter what the disorder is the child is made aware of the distorted thinking that cause them to have inaccurate views of the world around them. The therapist then works to challenge their faulty beliefs by teaching them, modeling different thoughts and approaches, and giving the child a chance to practice new thoughts and responses in both therapy sessions and real-life situations.

In addition to relieving current problems, Cognitive-Behavior Therapy also reduces the chance that a child who is currently struggling with psychological challenges will continue to struggle with problematic behaviors later in life. Overall, CBT is a broadly supported therapy; however, the therapist’s qualities and qualifications are also critical. Make sure you choose a therapist with whom you and your child feel comfortable. The best techniques are only as good as the therapist administering them.

To learn more about how CBT is used for more specific disorders, take a closer look at our “CBT Snapshot” series.

Q+A: How Do I Find a Therapist for My Child?