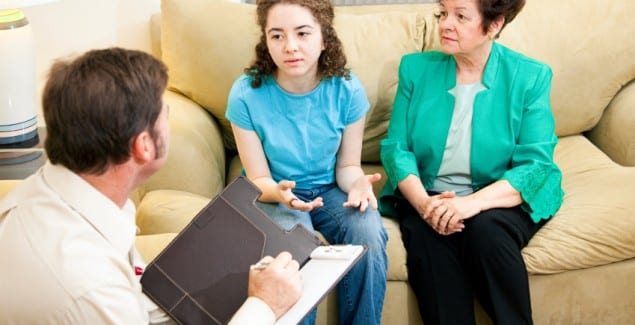 You can also listen to our podcast episode about Cognitive Behavior Therapy, featuring Susan Sprich, Ph.D., Director of the Cognitive-Behavioral Therapy Program at Massachusetts General Hospital. Listen below, or search for ‘Shrinking It Down’ wherever you get your podcasts.

In our posts on anxiety disorders and obsessive compulsive disorder, we discussed a special kind of talk therapy called Cognitive Behavioral Therapy (CBT).  As this kind of therapy is still relatively new, it makes sense for us to describe a bit about it, and debunk some of the misconceptions that often accompany this very important aspect of child and adolescent psychotherapy.

But, before we do that, let’s consider a particular case.  That’ll give us a story on which we can hang our understanding of CBT.

Tommy is a 15-year-old boy who is in the middle of his sophomore year of high school.  Tommy has always been a bit nervous, and over the last year, especially in the setting of his mother’s diagnosis of serious but treatable breast cancer, he has been increasingly reluctant to go to school.  This began by Tommy’s tendency to call home from the nurse’s office for many days in a row, and has progressed to Tommy’s unwillingness to attend school at all.  Although he initially told his parents that he wasn’t feeling well and would need to stay home, he soon simply acknowledged that he just didn’t want to go to school.  On the few times when his family forced him into the car, he got to school and began hyperventilating, developing sweaty palms and complaining that he might “pass out.”  After a few weeks, Tommy progressed even further with his difficulties, this time refusing to even leave the house.  Tommy’s parents were at a loss as to what to do, and so he was taken to see his pediatrician (again, much against his will).  Tommy was prescribed both benzodiazepines and antidepressants to help with his anxiety, but soon his pediatrician, after consulting with a child psychiatrist, recommended a course of Cognitive Behavioral Therapy.  Although Tommy initially did not want to engage in therapy, he eventually complied.

But what’s wrong with Tommy, and why would CBT be helpful?

Tommy appears to be suffering from generalized anxiety disorder with super-imposed panic attacks. There also appears to be at least a plausible psychological explanation; after Tommy’s mother became ill, Tommy perhaps became worried that he needed to watch his mother to make sure she would not become sick again.  This translated into the experience of severe panic and anxiety whenever he was separated from his mother, and this behavior soon generalized to include any separation at all from his house.

A therapist might offer this interpretation to Tommy, but not a CBT therapist.  Or, more accurately, a CBT therapist would not base the therapy on this interpretation.  CBT is based on both cognitions (i.e. thoughts) and behavior.  The goal is to change Tommy’s mode of thinking by helping him to alter his behavior. A simple way to see the difference between this mode of therapy and more traditional therapy is that the therapist is not necessarily as focused on the feelings as much as the behavior.  In traditional non-CBT therapy, the behavior shapes the thoughts and then alters the feelings.  In traditional therapy, a better understanding of the feelings leads to altered behavior.

For these reasons, CBT is rarely open-ended. There is usually a very specific goal—in Tommy’s case, to get out of the house and back into school.  The CBT therapist would help Tommy to first tolerate his own panic attacks, perhaps by having him run in place to mimic the physiologic effects of panic.  It is likely that Tommy would not enjoy this activity given that he’s spent the last few months doing all he can to avoid feeling panicked.  So, the CBT therapist would provoke a panic-like physical feeling, and then teach Tommy how to relax.  In fact, relaxation techniques, breathing exercises and focus of control are key to the behavioral aspects of CBT.

Some of the cognitive aspects will involve helping Tommy estimate which activities cause him the most discomfort.  Is it worse to leave his room, to leave his house, to walk away from his house, or to walk into school?  These activities will be ranked, and the CBT therapist will introduce each behavior in a graduated way.  Tommy will practice relaxation first upon leaving his room, and work his way up toward spending the day in school.  A schedule will be created and goals set.  If Tommy doesn’t meet a goal—for example, if he plans during the seventh week of treatment to walk into town for some ice cream but feels too anxious to do so when the time arrives—then the CBT therapist takes the treatment back to the most anxiety-provoking and still doable task.  In this way, Tommy will eventually find himself back in the classroom first for a few hours, then for a few more, and finally for a whole day.

Control is key, so Tommy will be asked to suggest what classes he ought to attend first.  He’ll again work from the courses that are least bothersome to the courses that are most bothersome.  The therapist might ask Tommy why math is easier to attend than social studies, but not much time will be spent on understanding this preference.  Instead, the information will be used to push Tommy toward one class before another.  If the therapy is successful, Tommy will soon master not only the tasks that he now finds difficult, but will also have skills in place for helping with future episodes of anxiety.

However, there are important caveats when discussing CBT, and these caveats are especially relevant when discussing kids.  Most importantly, all child and adolescent psychotherapy proceeds as a hodgepodge of different modalities.  If Tommy were to start crying and want to talk about how scared he was that his mother was sick, a good CBT therapist wouldn’t shy away from discussing these fears.  In fact, it is very likely that both a traditional therapist and a CBT therapist would do the same thing in this instance—help Tommy to understand that his mother isn’t horribly ill, that she’ll tell him when she’s sick, and that he can’t keep her healthy by staying at home.  In other words, all therapists need their patients to feel heard and understood.  In fact, there exists a good deal of data that these aspects of therapy—feeling trusted and understood—are the most robust predictors of success in psychotherapy, regardless of the modality of therapy employed.

So, why are there so many more studies looking at the efficacy of CBT than there are examining the effectiveness of more traditional, or psychodynamic therapy?  It turns out that because CBT is focused on a particular problem, and because it is goal-oriented and time-limited, it is much easier to study.  Psychodynamic therapy—play therapy, for example—is more often open-ended, and therefore doesn’t lend itself as readily to clinical trials in a study format.  That doesn’t mean that open-ended therapy doesn’t work, but it does mean that the evidence that exists suggests that for certain diagnoses, CBT is especially good.  OCD, anxiety, panic, PTSD, and to a lesser extent, depression and bipolar disorder, all have been shown to respond to CBT.  Still, there are millions of patients with these same syndromes who have benefitted from psychodynamic therapy as well.

Bottom line?  Make sure your child (and you!) trusts your therapist, and that your child feels heard.  From there, see what kind of therapy is most available, and best tolerated.  These are the key factors to a successful treatment.