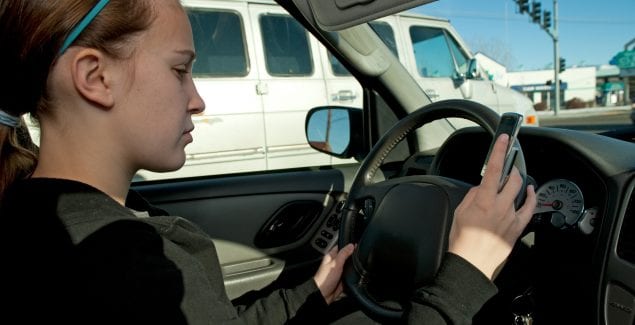 For seniors, it’s often a stressful time as they prepare for a new era in life after high school, but also one of enthusiasm as they feel a greater sense of confidence and autonomy.

It’s also a time parents worry more – about their teens’ future and about risky behaviors. And while worries about sex, drugs, and rock n roll often top the chart, a new study by Liberty Mutual Insurance and SADD (Students Against Destructive Decisions) adds driving to the list.

The study of 2,800 teens and 1,000 parents of teen drivers revealed that 75% of seniors are overconfident compared with 55% of sophomores and perceive themselves to be safer drivers, even though they had almost twice the number of accidents or near misses.

Though Liberty Mutual and SADD found in a previous study that teens recognize using smart phones and apps while driving is distracting and dangerous, teen driving behavior is not in line with what they believe. And worse, as teens get older, their risky behavior escalates.

“We can’t just blame teens and parents. We are all captives of the digital age. We’re driven to distraction by the compelling nature of apps, texts, notifications and social media.”

Here are some of the survey results:

Not really. One could argue that new drivers are more vigilant, cautious, aware of distractions and afraid of accidents. And while this may be true, the fact that 57% of seniors have accidents or near misses should reinforce caution. Seniors should know better. Given their accident rate, shouldn’t they learn from experience? Obviously, they don’t.

The Challenge for Teens

The teenage brain is not yet wired to fully learn from experience or even from knowing what is right. After all, they admit that phone use is distracting. They know this is true.

But the brain is not entirely developed until about age 26. While the higher levels that house knowledge, reasoning and logic are quite mature at younger ages, the neurons connecting the emotional centers – the ones driven by impulse – don’t get fully connected until the mid-20s. So, teens live more in the moment, and feelings present rule the day. Hence the contradiction between knowledge and behavior.

To add to the complexity of the situation, high school seniors are treated with increasing trust by their teachers, parents, coaches and other adults in their life. They assume greater responsibilities, as team captains or supervisors of younger siblings. And, in fact, they are more competent to do so.

Going a bit further into this developmental scenario, seniors are more likely to feel a sense of invincibility. It’s normal for them to feel invulnerable. And they do take more risks in general – socially, academically, and athletically. Risk taking is part and parcel of adolescence, and when successfully navigating a new challenge, teens further enhance their learning, skills, and sense of competence.

Consequently, they have a greater sense of confidence.

But this coming together of an immature brain driven by impulse, increased responsibilities reinforced and supported by adults, and newfound feelings of power and capacity is – excuse the pun – an accident waiting to happen.

The fact remains that behind the wheel, senior are inexperienced drivers. Their perception is not in line with the reality of real safety on the road.

The Challenge for Parents Teens of all ages look to their parents as role models. As much as they may resist authority or think they know all the answers, they still watch their parents closely.

In this and the previous study parents reveal they do not set great examples for safe driving. Around 80% of parents admit using the phone while driving, including for calls, texting and app use. And teens report that they let their parents know this is not safe!

Despite the increases in senior accidents, parents tend to relax consequences for seniors compared to sophomores. Nearly 70% of teens ages 15 and 16 say they would lose their driving privileges if they were in an accident, but only 55% of teens 18+ believe they would experience the same consequence.

Add all this up and it is nothing short of a perfect storm.

But we can’t just blame teens and parents. We are all captives of the digital age. We’re driven to distraction by the compelling nature of apps, texts, notifications and social media. It’s really hard not to look at your smart phone and take your eyes off the road. And even the slightest glance could prove fatal.

Tips for Parents and Teens

If we follow these guidelines and are transparent in our driving practices, both teens and parents will benefit. Distracted driving is not an option.

Improved awareness of our digital temptations, and establishing good driving practices is essential.

Lives will be saved.