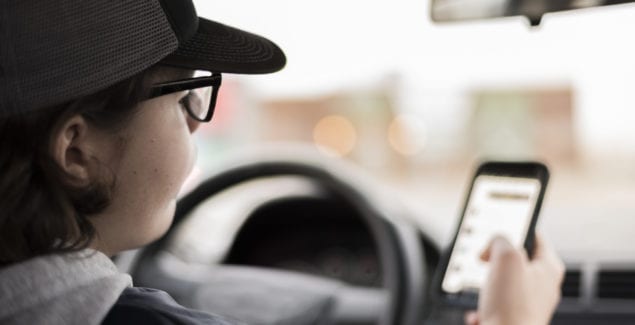 As parents, we share some really big milestones with our children. There’s riding that bike for the first time, braving the first day of school, or marching off to sleep-away camp.

And, of course, there’s the huge anxiety-provoking-and-incredibly-exciting moment of earning the first driver’s license.

Let’s face it: driving is different.

Driving notoriously provokes hand wringing, nail-biting, and rampant parental insomnia. The milestone of that first license? It can stoke some genuine parental terror!

I’m not sure that the terror ever really ends. My (Gene’s) kids are “grown up,” some married, some with kids. But still, every time they drive home from Sunday dinner at our house, I have flashbacks to their high school days. At least now my parting request, “Please call me when you get home,” is not met with an eye-role, but instead, “Sure, Dad!” And nowadays, that reply is usually via a text message.

But hold on a second.

Did they text me?

When did they text me?

Was it after they get out of the car? Or when they were still on the road?

And then that anxiety comes crashing back all over again.

Because here’s the bottom line: We still worry, and will probably always worry, about the safety of our kids—particularly when they’re on the road.

It’s normal. In fact, part of the reason we worry is because we know that we’ve had our own fair share of near misses. Most of us have nearly wrecked a car, or been in some sort of accident; that’s what comes with driving.

For teens, however, the worries about driving just continue to grow. Today the worry isn’t just about drinking and driving, or whether the other guy on the road is drowsy. It’s also about the invasion of the digital world into our lives while driving. Most of us have smartphones, and most of us find using them incredibly compelling. But, a smartphone in the hands of a driver? That’s super dangerous. And, it’s even more dangerous in the hands of a teen driver.

Since the start of 2016, I’ve taken on the role of senior consultant on adolescent psychiatry for SADD (Students Against Destructive Decisions). SADD has for a long time partnered with Liberty Mutual Insurance on its Teen Driving Study, the most recent iteration of which focused on the impact of app usage.

For the first time, this study captured not just what our kids say they do, but what they actually do. We all know that they like to say the right things; but, what they really feel and believe in the moment can be quite different. And, it’s these feelings that ultimately drive (excuse the pun) their behavior.

The study used the Harvard implicit association test (IAT). This test has been used for over 20 years to determine our unconscious biases and beliefs. The test for this particular study goes something like this:

You see an image of the road behind a steering wheel. Then, a smartphone comes into your field of vision with a music or navigation app. You have to instantly click on a phrase that pops up: “distracting,” “not distracting,” “important,” “fun,” etc. So, the test determines your immediate impulse in the moment, and that’s the connection between what it shows and what happens in real life.

It turns out that much of our behavior is based not on what we think is right, but instead on what we believe or feel is right in the moment.

Not surprisingly, while 95% of the teens surveyed acknowledged that app usage behind the wheel is dangerous, 68% admitted to using apps while driving. And, 80% noted on the IAT that navigation and music apps are “not distracting,” “important,” and “fun.” They saw these apps as critical utilities that are a necessity while driving.

How do we explain these results?

One explanation lies in making sense of the teen brain. The adolescent brain is not fully developed until about age 26. During the adolescent and young adult years, the “higher” parts of the brain that determine thinking and reasoning are fully developed but not efficiently utilized. This is because the centers that process emotion, impulse, and immediate rewards have not yet adequately connected to the thinking centers in a way that sets limits on powerful emotions and the instant gratification that these emotions engender. These pathways require the process of myelination, or insulation, that sets up the “adult” neural networks. The brain takes lots of years to establish the balance between our deepest emotional drives and our ability to slow things down; not until around our mid-20s can we effectively process the consequences of our intended actions before we act.

The bottom line for teens and young adults is this: They are largely driven by emotion, impulse, and reward. Immediate gratification trumps careful contemplation lots of the time.

Of course, adults are not immune to all this. Just because our brains are more efficient, doesn’t mean we don’t still make mistakes. We lose our tempers while driving all the time. This is a perfect example of letting that lower brain win in a dangerous situation.

Still, these kinds of impulsive and thoughtless acts happen more frequently with teens.

I began this post by noting how anxiety-provoking having a teen driver can be. So, what can we do as parents, caregivers, teachers, and mentors, especially given the results of this study? How can we pave the way for safety while the teen brain is in its process of evolution?

Here are five tips to keep in mind:

We all have a long way to go in breaking the compulsion to use our smartphones while driving.  But, breaking that compulsion will save lives—literally. And this is especially the case for our youngest drivers.

Study Methodology
Liberty Mutual Insurance and SADD commissioned Olson Zaltman to conduct implicit association testing with teens, and commissioned ORC International to conduct a quantitative survey that measured teen driving attitudes and behaviors. The implicit association testing (IAT) part of the Teen Driving Study was conducted February 10-29, 2016, among 2,650 teens, and the survey was conducted April 4-28, 2016, among 2,500 teens from high schools across the country. The IAT method provided teens with a range of different visual driving scenarios such as texting, using various apps, and receiving phone calls along with a set of key words. The speed with which teens associated these scenarios with words such as “distracting,” “safe,” and “fun,” among others, was then used to reveal their more automatic, gut-level reactions and feelings concerning distracted and dangerous driving behaviors.

Overall, the findings from the Teen Driving Study can be interpreted at a 95% confidence interval, with an error margin of +/- 1% (IAT) and +/-1.9% (survey). Error margins for subsets such as licensed drivers will be wider. Additionally, the study included a survey of 1,000 parents of teenage drivers in high school that has an overall error margin of +/- 3.1%.