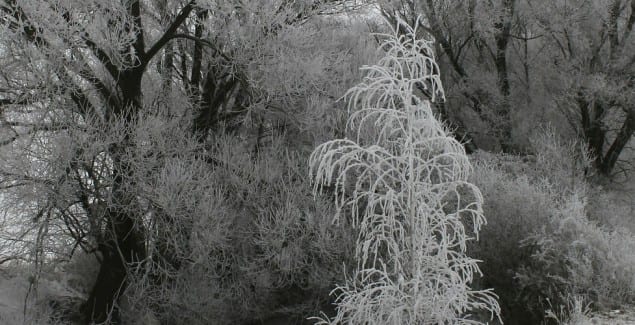 Tomorrow, it could get as low as four degrees in Boston. Four degrees.

It’s hard to wrap your mind around four degrees. Four degrees means that the steam rising from industrial chimneys looks frozen.  It means that geese are stuck in the river, their feet trapped under the ice. It means that your face hurts when you smile.

Let’s face it—this time of year, the days are short, the nights are long, the sunlight is fleeting, and for many of us, our moods plummet.

Seasonal affective disorder, or SAD, has perhaps the best acronym of all psychiatric syndromes.  The term nicely sums up how we feel as we throw on layers over layers over more layers, take baby steps over frozen driveways, and slog our way behind plows and through streets narrowed by collected snow.  If we’re lucky, we’ve had the experience of jetting off to somewhere warm and sunny when the depths of winter attack.  It’s amazing how fast our moods improve following these brief forays away from atmospheric darkness.

So, although only a few of us get profoundly depressed during the cold winter months, almost all of us feel more tired, more down, and a bit less peppy as winter settles in.  And, it turns out, there is some pretty cool science out there to help us manage these potentially dour times.

Let’s do the science first; that’ll allow the recommendations to make more sense.

Folks who live in higher latitudes (way north or way south) are at higher risk for feeling blue during the winter than are folks who live in more consistent climates.  These studies have been fairly readily replicated, and there are even some fascinating investigations showing that people with the means to move to warmer locations will do so more often if they appear to have a genetic vulnerability to depression and SAD.  On the flip side, there is a body of literature showing that some people seem relatively psychologically immune to shorter, colder days.  For example, a very interesting study looked at Icelandic natives who moved to balmy (!) Canada.  If length of day alone were the sole predictor of mood, you’d expect these hardy Scandinavian types to do better as they moved farther south.  However, the newly settled Canadian Icelandic natives didn’t appreciably change.  Their collective mood was pretty good in Iceland, and pretty good in Canada.  That has led some to suggest that the thousands of years that contribute to Icelandic heritage genetically protect the people against the effects of SAD.

Still, it’s safe to say that we are all affected, at least neurobiologically, by the amount of sunlight to which we’re exposed, and the relative temperatures that we endure.  Although both temperature and light seem to play a role, it’s light itself that is most evidenced to affect mood in the winter.

Like virtually all animals, humans have inherent circadian rhythms.  These rhythms are controlled in our brains by the suprachiasmtic nucleus and the pineal gland.  (While it’s not necessary that you understand the suprachiasmtic nucleus to be resilient with SAD, the term itself is so cool sounding that I felt compelled to throw it into this blog).  Fluctuations in melatonin help our brains to register light, and appear to influence how our mood is affected by light as well.  However, the role of melatonin changes are better understood in animals with more clearly demarcated seasonal behaviors.  Animals that hibernate, for example, have huge fluctuations in melatonin.  At this point, we humans don’t tend to do that much better when we utilize exogenous melatonin as a means of managing our moods during winter.

We also know that a bunch of neurotransmitters play significant roles in the onset of SAD.  Serotonin, which sometimes seems to be involved in every aspect of human emotion, seems less active during shorter days.  So does norepinephrine.  Both of these chemical findings have contributed to treatment recommendations as well.

Finally, there is a cruel paradox to SAD.  The stuff that makes you feel better during winter is exactly the stuff that you don’t really want to do when the days are so short.  There is a body of evolutionary literature that suggests that our bodies store fat and that we are therefore compelled to exercise less during winter as an adaptive measure towards conserving energy.  Having said that, there is very good evidence that eating better and exercising more makes SAD less burdensome.

Let’s play with the science and generate some strategies.  First of all, the epidemiology suggests that most of us will experience some worsening of mood as the days get shorter.  As the length of days varies more as a function of latitude, it makes sense that we’ll all be vulnerable at extremes of north and south.  People in Boston will be more affected by SAD than will people in Miami.  People in Santiago will be more affected than will people in Sao Paulo.

So, if you can, get thee to a warmer climate and a longer day.  That’s of course not always possible or feasible, but it has been associated with feeling better from SAD.  If you come back from Hawaii and think that you’re feeling better, you’re not imagining it.  There is good evidence that your brain has reset itself due to the change in environment.  The length of this effect varies from person to person.

But, if you can’t get thee to a longer day, bring the longer day to you.  Light therapy is quite effective, and adequate sources of light can be purchased for around $200.  Current recommendations include using a 10,000 Lux bulb (thus mimicking the UV rays of our sun), and spending about 30 minutes every morning 12 to 18 inches from the light itself.  Although you need not look directly into the light, studies show that this intervention is most effective if your eyes are open during this time.  However, check with your ophthalmologist first to make sure that it’s OK to expose your eyes to this kind of light.

Medications have been helpful for many, and given the association with serotonin and norepinephrine, medicines that increase these neurotransmitters are recommended.  Check with your doctor about whether this is a good option for you.

And, of course, there are the old nemeses—eat better and exercise more.

I know, I know.  Who wants to do that when it’s so cold out, that you’d much rather curl up and watch Netflix?  But, it turns out that eating more healthily increases serotonin precursors in your diet, and exercise itself generates chemicals that keep neurons healthier.

The good news if you hate winter?

By definition, the Earth turns, and the magnolias bloom.

But, if the short days get you down, there are ways to at least make them more bearable.  And you can still watch Netflix.

Coping With the Wintertime Blahs – Shrinking It Down