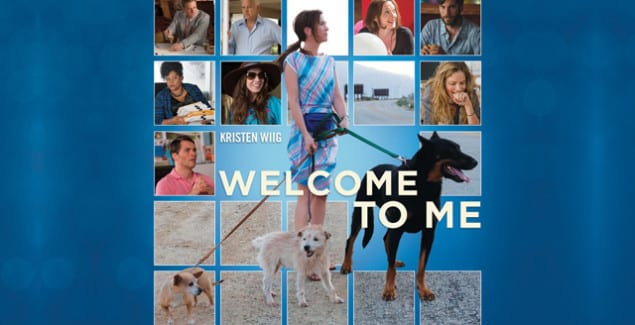 "Welcome to Me" (photo courtesy of ComingSoon.net).

There’s a new movie out there about a woman with borderline personality disorder (BPD).

What’s more, there’s a new comedy out there about a woman with borderline personality disorder.

In fact, there’s a new comedy out there which stars Kristen Wiig as a woman with borderline personality disorder who starts a television show called “Welcome to Me” after she wins the lottery (which is, incidentally, the name of the film).

You can read about borderline personality disorder at this link. It’s a terribly painful emotional state characterized by profound mood swings, difficulty tolerating personal intimacy and a tendency to see the world in starkly black and white terms.  It’s also a condition that has been much maligned in movies.  This is why my initial reaction upon hearing about the movie was pretty straightforward—I just didn’t want to see it.  I didn’t want another movie that stereotyped psychiatric suffering, that made a mockery of emotional angst, and that was prejudiced and biased toward those who suffer psychiatric illnesses—as well as those who try to help them.

I did a quick mental inventory of the movies that openly featured characters considered to have this particular syndrome.

There’s Fatal Attraction, of course, Girl, Interrupted and Misery.  Some have even wondered whether Anakin Skywalker has borderline personality disorder. The point is, none of these films really did the patients who suffer from this syndrome any favors.  If you want a more exhaustive list of the movies that are purported to feature someone with borderline personality disorder, check out this article.

But, I decided to watch the movie anyway.

And, I have to admit, I was pleasantly surprised.

It’s still Hollywood.  It still sacrifices accuracy for the sake of the story, but I didn’t find Kristen Wiig’s character offensive or even too far off the mark.  I know some critics have noted that the movie portrays Ms. Wiig’s character as perhaps somewhat limited intellectually, or maybe overly self-involved, but those are features that are not at all unique to borderline personality disorder.  In other words, I saw those aspects of her character as ancillary to her condition, and not necessarily a function of her diagnosis.

I’m aware and am sympathetic with the fact that this film has rubbed some people the wrong way.  There is certainly plenty of room to criticize the movie, including its diagnostic accuracy.

But, compared to Glenn Close and her boiled bunny in Fatal Attraction, this is a huge step forward.  As a psychiatric educator, I’m excited that there’s a new movie out there that presents a non-violent and even nuanced view of the suffering that borderline personality disorder can engender.

The movie also continues the trend in current filmmaking of incorporating in an almost matter-of-fact fashion psychiatric terminology, including specific psychiatric medications.  My hope is that psychiatric and psychological concepts are making their way into movies with much greater sympathy and empathy, and that the stories that utilize these syndromes as plot devices are actually better for it.  I also think we can make the case that when done well, these movies can actually reduce stigma.

But, don’t take my word for it.  Go see the movie, and let us know your thoughts. There’s a lively discussion waiting to be had.

Extra Time on Tests: Does It Work? – Shrinking It Down