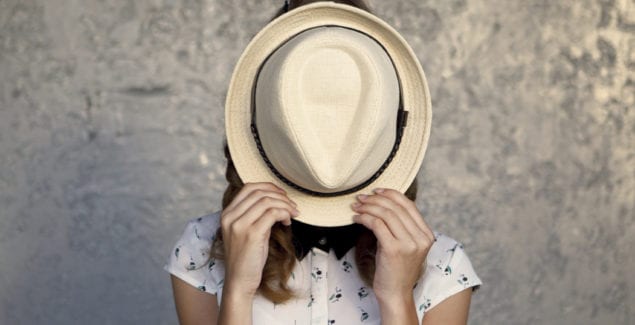 For background, it makes sense to mention that I teach an undergraduate class that focuses on the psychological, cultural, and neurobiological aspects of horror films.  The scene I want to talk about triggered a discussion among some of my students about whether there ought to be a “trigger warning” before we discuss the movie in class.

But I digress. It’s just that context is everything. Now that we’ve set the context, let’s get back to the scene.

In the scene I want to talk about, the unfortunate scientist (played by Jeff Goldblum), who is well on his way to becoming a fly-human hybrid, engages in about 15 straight hours of sexual activity with his increasingly uncomfortable love interest (played by Gina Davis). He is writhing throughout the scene, literally sprouting coarse, insect-like hairs from his back as the sweat builds on his brow. His face is a mess, with little bits of skin falling off to reveal insect-like wrinkles. Worse, at some point during those 15 hours, Gina Davis’ character becomes tired and wants to stop. Jeff Goldblum, being more fly than human, doesn’t really listen to her, and continues to buzz along with what he’s doing.

If we want to break it down, and I think it makes sense not to mince words right now, what starts in the movie as an intimate love scene turns into what is essentially forced sexual misconduct committed by an emerging monster.

If ever there were a place for a “trigger warning,” the academic discussion of this film would be it.

To make matters even more compelling, we have data that off-putting pedagogic material, including horror films, can cause or exacerbate post-traumatic stress disorder (PTSD). There is also evidence that the prevalence of already experienced traumatic events among matriculating students in college is perhaps higher than was previously recognized.

Hence, the conundrum over “trigger warnings.”

And, ironically, the conundrum has blossomed into such a cacophony of protests from both sides of the issue that it’s now both ludicrous and imaginable that a course discussing the efficacy of trigger warnings might itself be a trigger. Whew!

Upon taking a deep breath when I was teaching the course, I found that my students were amused, slightly bewildered, but also earnest and eager to discuss the unsettled question of whether a warning needed to be issued before they were asked to watch “The Fly.” Many of the students were quite put off by the scene I described. They also mentioned that the whole point of the scene was to be off-putting. A third mentioned that a class focusing on horror was going to have an awful lot of triggers. That observation put the unexpectedly shortish discussion of trigger warnings in a class focused on horror films to rest. If you sign up to take a class on horror films, there are bound to be triggers. Either that, or the entire syllabus would need to be peppered with Disney films.

Except that Disney has some pretty traumatic moments as well. Dumbo is taken from his mother. Bambi’s mother is shot and killed. The witch in Snow White? Don’t even get me started—she still scares me.

This kind of debate is really the problem: what triggers us is hugely variable. Some issues might be universally upsetting. Some issues might be uniquely upsetting. Also, it’s not as if warning students that they are about to discuss possibly objectionable material is new. Good teachers have been doing that since good teachers have been teaching. Good teachers know that it isn’t what you say in class; it’s the emotional music with which you say it.

Maybe today’s students are more coddled. This is the premise in the somewhat extreme (and to my reading also exaggerated) essay that appeared in The Atlantic last fall. Maybe today’s students are also more sensitive.  This is the premise in the somewhat tempered and more balanced approach, at least to my reading, that appeared in a follow-up essay in The New Republic. Heck, there has been no shortage of essays on this subject. Even the venerable Judy Blum has weighed in on the issue. No stranger to censorship, Ms. Blum voiced her strong disapproval of the trigger warning system in an interview she gave a few months ago in Time.

But all this teeth gnashing and tongue wagging is really not getting us anywhere in what is, in fact, a very important debate. We NEED to be able to discuss sensitive subjects. And we NEED to be respectful of the possibility that some of those who participate in the discussion will be bothered, perhaps even significantly and clinically bothered, by the discussion.

It is, after all, college. We NEED to disagree.

But, if you take this line of reasoning (as I do), then you’d better also be prepared to argue that we NEED to disagree respectfully and with dignity and civility. That seems obvious, but it’s shocking to me how much rancor this debate has engendered. This very notion was the premise of the now famous letter that the University of Chicago sent to its students just before the start of the school year. You’re going to hear some upsetting stuff, the letter said. But we’re also going to help you to talk about this upsetting stuff. That’s among the primary goals of higher education: to make upsetting stuff talk-about-able.

That’s awfully similar to the job of the mental health clinician. We try to make the un-talk-about-able talk-about-able. And you know what? So does every good teacher.

I’m also not too bothered by those who object.

What bothers me is that we’ve gotten so entrenched in our positions that we’ve forgotten that we’re mostly arguing about the same thing. Those of us who teach want freedom of speech, and we want freedom of inquiry. We want our students to be comfortable feeling slightly or even more than slightly uncomfortable. In other words, we all want our students to move forward with their intellectual and emotional development.

Remember: it’s the music of the discussion, not just the content. That’s no easy task, and it takes conscious and mindful practice. Even if you’re talking about a fly-human hybrid.