Why Are We Denying Purple Hearts To Veterans With PTSD? | MGH Clay Center for Young Healthy Minds 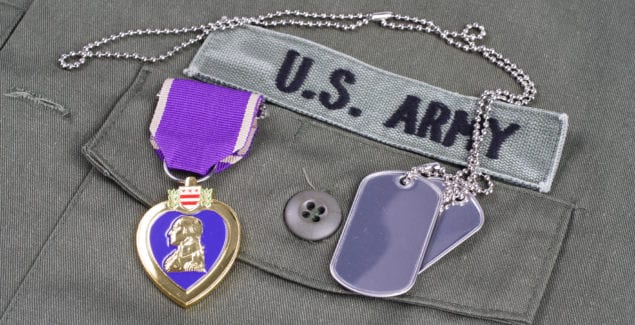 I have seen Arthur Segaloff* for psychiatric care for over 20 years. He suffers from severe post-traumatic stress disorder (PTSD) following his two tours of duty in Vietnam.

Arthur attended the University of Massachusetts, and graduated in 1969. Although he was drafted upon losing his student waiver, he chose instead to enlist as a volunteer. Soon he was training to deactivate bombs and improvised explosive devices (IEDs) in the field.

Although he proved to be quite talented, and ultimately succeeded in saving countless lives, he also experienced failure. No one can detect and suppress every device in the jungle.

Each and every death he witnessed felt like a terrible personal failure. He still dreams of the horrifying scenes he lived through in the war.

To this day, Arthur suffers from PTSD and profound survivor’s guilt. While better in many ways, he qualified for total disability based on his diagnosis, and sees me on a regular basis.

I appreciate the profound impact PTSD has had on his life—his daily flashbacks, impaired sleep, obsessions over what he could have done to save more lives, extreme vigilance to protect the ones he loves. Not a day goes by that he doesn’t question himself.

It defies me that he has not earned Purple Hearts for these long-lasting effects of PTSD—awards to stand beside the two Bronze Star Medals for Valor he received.

In 2009, the Pentagon decided not to award the Purple Heart to veterans. This decision was supported by the Military Order of the Purple Heart (MOPH). Despite their sympathy for those who suffer from PTSD, the MOPH contend that the award is for those who have suffered physical wounds on the battlefield. In their view, the loss of a limb or any other combat wound is a permanent loss, whereas PTSD is a treatable disease. And, they argue, some may feign illness in order to receive medical treatment at the VA.

Others claim that the psychological, emotional and moral injuries of war deserve the same recognition as physical injuries. While psychiatric conditions are not visible, the cost imparted on the individual and family is devastating. Furthermore, there are sound scientific findings that PTSD and other psychiatric consequences of battle have profound physical effects on brain structure and function.

Let’s face it: the brain is an organ of the body. It may be insulted by traumatic brain injury such as a concussion, or by derangement of neural circuits (as is the case in PTSD). And, while some individuals may heal and adjust, for others, suffering is life-long.

Why should we discriminate between a soldier who has lost a limb, yet worked through a rehabilitation program and gone on to build a good life for himself, and one who has been severely traumatized psychiatrically, yet worked through a treatment program and gone on to do the same? Both have sustained the scars of war. Both have served our nation. Both have had to cope with hardship along with their families, who have watched and endured their suffering and recovery.

There is a high correlation of suicidal thoughts, attempts and actions in veterans who suffer from PTSD and related anxiety disorders, including survivor’s guilt (veteran suicides account for 20% of all suicides in the United States). In fact, the severity of suicides among veterans has resulted in the U.S. Senate and House unanimously passing the Clay Hunt Suicide Prevention for American Veterans (SAV) Act, and President Obama signing it into effect.

The New York Times reported that 22 veterans kill themselves every day. While many are older veterans, a survey conducted by the Iraq and Afghanistan Veterans of America (IAVA)—which had made the Clay Hunt bill a centerpiece of its efforts to prevent veteran suicides—discovered that two out of five of its members knew of a recent combat veteran who had committed suicide. And, it’s estimated that one out of five veterans of the Iraq and Afghanistan war suffers from PTSD.

In a previous blog, I talked about my dad’s undiagnosed PTSD following World War II. Back in those days, we had no idea what PTSD was, how psychological and emotional trauma affect brain structure and function. Now we do.

With our increased knowledge of trauma and its impact on our veterans’ brains, minds and emotions, how can we sit on the sidelines and not at least honor their sacrifice?

How can we not provide better services for the emotional consequences of war? How can we let our soldiers serve us, and then stand back while they suffer horrible invisible wounds?

We should not allow the stigma of psychiatric disorders to add insult to injury for our veterans.

A Note From Arthur

Vietnam veterans are a national resource, very often untapped and yet shuffled aside. Many of us are in our 60s and 70s.We are dying by the hundreds. We are homeless. We fill many prisons.

What could we possibly do to help our younger brothers and sisters in arms? We can make sure that a generation of veterans is never left behind again. We see and experience firsthand the flaws in the current delivery of veterans’ mental health services; I, for one, see veterans at the USO and the Red Cross as a veteran volunteer.

Confusion, social disconnection and PTSD still exist—in fact, even more so than expected because this is a volunteer military. Yet, adequate mental health treatment programs and support groups, job creation and an overall sense of self-worth are lacking. PTSD does not go away by itself; we who suffer from it face daily challenges to survive. The young veterans of today need to be educated about their benefits. They require mentors and advocates. Most successful treatment systems begin with outreach and grassroots efforts.

Our Vietnam generation will not leave anyone behind.

* Arthur Segaloff has given permission to reveal his relationship with Dr. Beresin.