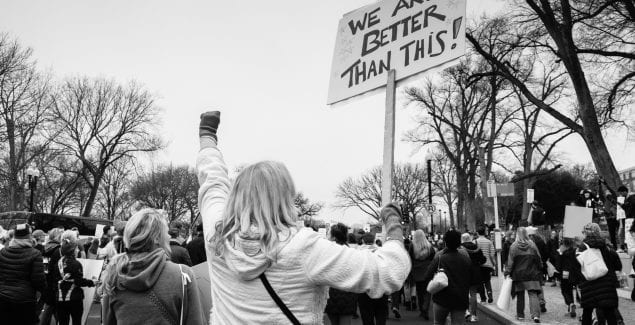 Posted in: Hot Topics, Parenting Concerns, Teenagers, You & Your Family

When I was a ninth grader in 1964, I was suspended from school for selling peace buttons for the Student Nonviolent Coordinating Committee.

I was a tad anxious about how my mom would react, but when I came home that morning, she was beaming. “Good for you! Just don’t sell any more on school property,” she said.

I should have expected her reaction. She had been a teen-aged activist for organized labor in the 1930s. This was our family tradition. I became part of a group of kids who bonded over civil rights. Then, when I was in college, my mission turned to the movement against the war in Vietnam.

I do not want to write about guns, or the Florida tragedy, or the movement that is rising out of it and has my full support. Rather, let me put on my shrink hat and address why it is so good for teens to get politically active, from Twitter to the streets.

Let’s look at some major components of their adolescent growth curve. We also need to appreciate that development doesn’t occur in a vacuum, nor is it a theoretical construct. It must take place in real time with real people and in real situations. It must be lived and experienced.

And through all this — though teens won’t often admit it — they do need adult supervision, because they typically are driven by impulse and at times don’t stop and think before they act.

The Need for Supervision

The teenage brain is ruled by the reptilian structures that are driven by emotion, pleasure and immediate gratification. From ages 14 to 26, the neurons that connect the centers of immediate passion to the higher cortical (thought) regions that slow things down and weigh actions and consequences become myelinated — a process of insulating the wires so that emotion is modulated by reason.

This means unsupervised, teens tend to do impulsive, sometimes stupid things. And while they rarely acknowledge it, they do need adult supervision for guidance and safety.

In my time, “never trust anyone over 30” was a slogan. Though when push came to shove, I was really glad I had my parents and other mentors to guide me. And I’m glad now to see adults working with the teen activists.

Considering the norms of development, these kids are right on track. They have so much to gain from their courageous efforts. We should applaud them and encourage their work.

Not only will their activism abet their adolescent development, they may remind us all what it means to have a voice and use it to try to make the world a better place.

Shrinking It Down: Kids, Marches, and Media (Season 1, Episode 14)