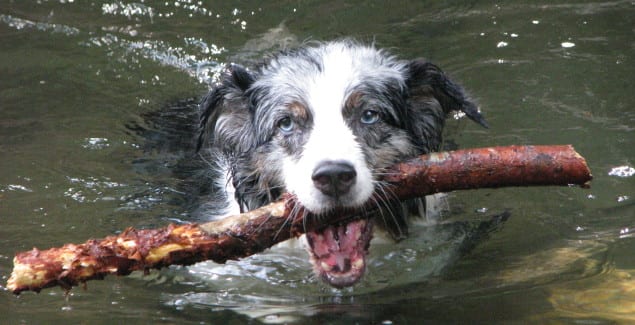 Today we had to put down Toby.

He was a 15-year-old Australian Shepherd, and probably one of the best dogs we ever had. And we’ve had plenty.

It seems trite to say that losing a pet is like losing a member of the family. The fact is, though, it’s actually a gross understatement. Pets are unique and hold a special place in our hearts.

Don’t get me wrong—I’m not saying that dogs are more important or more valuable than other people in our lives. But, they do trump humans in many ways.

For one thing, they love us unconditionally. And that’s more than I can say about many human companions.

It doesn’t take much to make them happy. Even the smallest gesture evokes unequivocal joy—throwing a toy, asking if they want to go for a ride in the car, handing them a treat. How many of us show such appreciation and adoration for such simple pleasures?

Their loyalty is only matched by the way they care for us—perhaps even more so than we could ever care for them. Dogs can sense how we’re feeling. It doesn’t matter whether we’re happy, angry, or sad, they just inherently know what to do. So many times I’ve come home exhausted, frustrated, upset, but no words or explanations were ever necessary to convey my emotions. Toby got it.

Earlier I accompanied my 99-year-old mother to a checkup with her internist. When I mentioned to her the loss of our dog, she wisely noted, “In some ways, it’s harder than with people. At least with humans we can talk with each other, say goodbye. With animals, there’s no way to have that kind of interaction. And somehow, maybe that’s what makes us feel it more.”

Dogs are immediately emotionally accessible. No barriers. That’s more than I can say about most people. Maybe we can say goodbye, but far too often we cloak our feelings with words.

So, we humans are stuck nursing our feelings when it comes to our relationships with pets. Dogs are pretty straightforward. And, for the most part, they don’t complain.

Toby skirted death a number of times in recent years. He survived surgery for liver cancer. When his vocal cord was later tied back and he lost his ability to bark, he tried to with all his might regardless—even though the sound coming out sounded more like an old frog with laryngitis. Still, he went along without complaint.

Progressively he became deaf with a syndrome that also weakened his hind legs. We could only call him by clapping our hands. That became his call to “come.” And, so he came when we clapped. Toby seemed just fine with the new way of communicating.

His sidekick, Bear, a cockapoo, also learned to come from clapping. The pals adjusted well.

More recently, Toby developed a urinary tract infection along with pain in his hind legs. When he lost his appetite and could hardly stand at his food bowl, I thought we were facing the end. But I brought him to the vet, and thanks to a combination of antibiotics and anti-inflammatory medications, he did pretty well. I started using doggy diapers that must have been terribly uncomfortable. Still, there was never a whimper, and he soon learned when he came in from relieving himself outdoors to wait patiently while we affixed a new one.

He also developed a mass on his head, probably some kind of tumor. No complaints.

I certainly complain. I can’t imagine not complaining through such ordeals.

What made all of this more unbearable was that through it all, Toby continued to stare you right in the eye and smile. If his legs were weak, if he couldn’t walk down the stairs, if he tried to bark and nothing came out, he just received a pat on the head and panted happily. It might have been easier for me if he could just whine or moan in some way.

This morning he had a seizure. That was the final blow. The immediate family texted, and we decided there was nothing more we could do. We didn’t want his latest condition to progress and cause further suffering as a result. And, the vet was not optimistic about treating seizures. The decision was made.

On the way to the vet, my wife took him to a very nice hamburger joint. She took videos of him happily scarfing down a couple of burgers. His last supper.

You might think seeing him smile all the way to his grave would bring me some kind of relief.

But it was nearly impossible for me to watch the clips without feeling a deep sadness and emptiness. I should have been happy to see him so pleased just before his death. I have no idea how my wife was able to tolerate it. Toby, like many herders, had one master—my wife. She took on the responsibility of letting him go. It was her dog.

Why did I react this way?

I think it’s because dogs and some folks, like my wife, are generally accepting—accepting of life, hardship, even death. That’s resilience.

I wonder if my being trained as a doctor reinforced the Faustian wish to know all, love all, and heal all. Or maybe I’m just too attached to these loving, playful and forgiving creatures.

It’s hard at times like this to have real perspective. But one thing is clear: we humans have a lot to learn from our canine friends.

For guidance on helping your child cope with the death of a pet, we invite you to check out our related blog here.

Shrinking It Down: The Death of a Pet

The Pain of Losing a Pet

How Do I Help A Child Cope With The Death Of A Loved One?