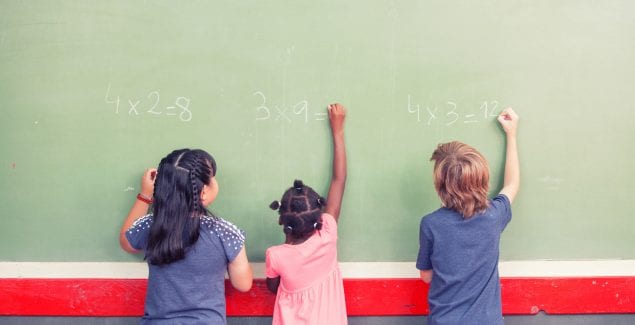 Brenda was a typical sixth grader in every way but one: she faced incredible difficulty in math class.  She was a very good reader and writer, and in fact a very good student in every way – except when she entered Mr. Barnard’s classroom.

Although Brenda appeared to understand the lessons in school, she rarely seemed to know what to do when she sat down at the kitchen counter to do her math homework.  At other times, she seemed prepared for a math test (as when she studied with her dad the night before) only to fail a test the next day.  When her dad tried to help her with the math concepts by telling her to “draw it out,” she had no idea what he meant or how that would possibly be helpful to her.

Brenda’s parents sought an evaluation from me, not primarily because of her problems with math, but because she began saying things like, “I’m dumb.  I can’t learn anything.”  She began to feel anxious about taking tests.  Although Brenda had many other positive attributes, her struggles with math started to damage her self-esteem.

Brenda’s presentation is a typical one for a child with a math disorder, which is sometimes referred to as dyscalculia or a specific learning disability in math.  A math disorder often occurs alongside other learning and attention disorders, such as dyslexia and ADHD.  A math disorder that does not occur with another condition is a rare disability, occurring perhaps in about 1% of the population.https://www.youtube.com/watch?v=Owzz1vKh-kM

Brenda’s history was quite typical for that of a child with a math disability.  She showed a fairly normal development until 3rd grade when math concepts became hard for her to learn.  She also had difficulty learning to tell time and learning about money.  What confused her parents and teachers most of all was that she had no idea when her answers to math problems were right or grossly wrong.  For example, when asked to divide 560 by 5 she said, “1002.”  Although she could memorize basic math facts, she wasn’t able to apply them because she didn’t have a good mastery of concepts behind them.

Formal, individualized testing is necessary to diagnose a math disorder.  It is difficult to make this diagnosis until a child reaches school age, because the child’s progress in math must be below age expectations and not due to a lack of intelligence or instruction.

Sometimes warning signs can be found in a child’s history, such as a poor sense of direction, poor athletic coordination, difficulty keeping score in board games, problems learning strategic games such as chess, and difficulty learning abstract concepts such as time or money.  A thorough evaluation can be performed through the public-school system or through a private clinic and should include:

We would expect children with a math disability to have scores that were selectively low in math, most often by demonstrating performance below chronological age, grade or intellectual ability.

There is no single treatment program for all math disabilities, because the treatment depends on what the child’s main deficits are.  For example, one child’s problems may be related to visual-spatial confusion, whereas another child’s problems may be related to problems with getting the “big picture” or understanding the underlying concepts of mathematical problem solving.  These children may have difficulties with executive functions and may see math as a collection of facts that need to be memorized.  However, they have difficulty finding patterns and meaning in math.  Other children have problems with many of these issues.

Determining which of these difficulties underlies a child’s problem is extremely important – and the reason why a battery of tests is necessary.  The evaluation can define the areas of specific weakness so that individual tutoring (which is almost always recommended) can be custom designed.  Some approaches that are helpful for children include:

Though a math disorder is less common than other learning disabilities such as dyslexia, it can be quite impairing, particularly as a child moves on in school.  Many subjects, such as chemistry, astronomy, and physics, rely heavily on math ability.

Brenda received tutoring for her math weakness in 6th grade but found that she often required extra support in math throughout her school history.  Though she never felt she was “good” in math, she stopped feeling “dumb” just because math didn’t come easily to her.  Understanding her strengths and weaknesses, while achieving academic success through the right kinds of support, was a big step towards helping her become a more confident and effective student.