The Problem of Social Anxiety Disorder 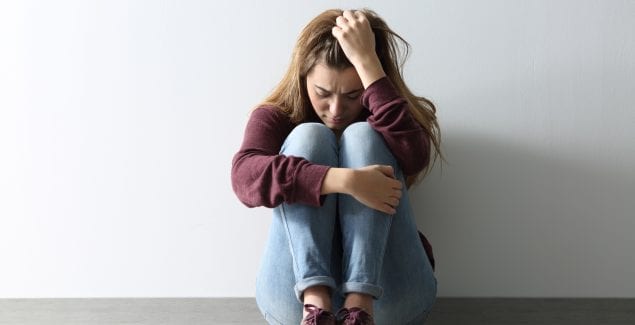 Most kids and young adults look forward to going back to school. But for those with social anxiety, school and all that comes with it can literally provoke dread.

I’m going to show you what I mean. Let’s consider Sally.

In grade school, she was active in community softball, made the rounds for birthday parties and had a fair share of sleepovers. She loved acting, and had a few minor parts in community theater. Back then, she was a happy little girl and always had one or two best friends in the neighborhood.

But her mom noticed that something began to change in middle school. She was less eager to play sports. She came home right after school and turned down opportunities to try out for the school play, even though she was specifically invited by the drama teacher who knew her from previous plays. And she was increasingly reluctant to attend parties and outings with her friends.

In high school things got even harder. She was always dutiful about going to school, but came home and went right to her room. Her two best friends frequently asked her to join them to hang out with other friends, but she refused. “Too much homework,” she would say. When her friends or parents asked what was wrong, she denied anything.

This once quiet but chipper little girl looked very sad. She seemed lost – and lonely.

Something’s not right, here. That much is clear. But is this just a normal phase? Don’t all kids get a little shy as they get older? Doesn’t this especially happen with girls?

Well, maybe. There’s some data to support some minor changes in behavior as part of normal development, but this is different.

The key here is that Sally’s troubles are almost exclusively in her social world. In fact, her parents note that she still happily attends dinners with her family. She still teases her cousins. Vacations are fine. It’s when she’s around her peers at school that things just get hard.

Her parents of course ran the usual and often frightening list of possibilities. Was she having problems with drugs? Was she being bullied? Had something awful happened at school? Maybe she was depressed? All of this would explain her isolation, her declining grades, and her sadness.

Except that Sally was perfectly fine at home. It was only when her parents challenged her to try new experiences, to meet new kids, that she became agitated. Her parents were struggling. How could they explain what was happening?

Sally’s pediatrician looked for Mono. She looked for Lyme Disease. She talked to Sally about depression, but Sally just didn’t seem depressed to her.

It was actually Sally’s teachers who helped to make sense of her difficulties. They noted that her grades had fallen almost entirely because of poor participation in group projects. One teacher mentioned that when confronted about her failure to participate in an oral presentation, she “clammed up, and appeared intensely distressed.”

“Kind of shaky,” the teacher said. “All pale and sweaty. Like she was having a panic attack.”

That was when the school counselor spoke up. She thought that Sally might have Social Anxiety Disorder.

What is Social Anxiety Disorder?

First, pretty much everyone has social anxiety. We can’t call that feeling alone a disorder. Social Anxiety Disorder is different, though. It’s on the same spectrum as social anxiety, but it is potentially debilitating. Previously known as Social Phobia, Social Anxiety Disorder is actually more common than people think. It affects about 7% of kids, according to most reports, though this figure may be low because it’s so underreported. It is usually diagnosed around age 13, and it can have either a slow onset or a rapid appearance.  The rapid onsets are almost always tied to a traumatic event.

Kids with Social Anxiety Disorder have an intense fear that they are being judged or scrutinized by others, especially in social situations. They are plagued with concerns that they said or did something wrong, and they feel embarrassed and humiliated. They leave a social situation, particularly with kids or adults they don’t know well, and they obsess about what they said or did. Most often they’re certain they made fools of themselves, and they’re certain they’ll do it again. Face-to-face social interactions are, therefore, fraught with pain. They feel like they’re going to pass out. They avoid any eye contact. They might struggle to catch their breath. When someone asks them something, their minds go blank, and of course this only perpetuates their worries.

It’s pretty awful, and to avoid all this, they do what any of us would do if we felt the same way. They avoid social situations.

Some researchers have considered that people with anxiety disorders have an overactive amygdala and other regions of the brain that deal with the fight or flight response. After all, all anxiety disorders have something in common – the fear that one thing or another is going to result in serious personal harm. They are wired for vigilance. Yet, the “danger” is not really threatening in the moment. It’s like an alarm that goes off without need. The problem is that it feels – physically and emotionally – like real danger. These “learned” situations then become generalized and associated with all social situations. That’s when kids start staying home.

Kids who develop social anxiety have several other risk factors. They may be naturally shy, timid or restrained in social situations. These are innate personality traits. In other cases, they may have an obvious trait that draws public attention, such as a physical disability or stuttering. Still, in other cases, they may have trauma histories of abuse or neglect at home.

Finally, these kids can have associated Depression. The mood disorder may be biologically based and hereditary, or may be brought about by the lack of social contact that Social Anxiety engenders.

What Can Be Done?

Social anxiety is quite responsive to treatment. Here’s what we need to do:

Treating social anxiety is not going to be easy for anyone. It’s like asking you to walk into a lion’s den – to face what you most fear, what is most dangerous to you.

But with a good therapist, supportive family, friends and teachers, the outlook is excellent.

Helping Kids Fit In At School