The Senior Prom: A Joyous Rite of Passage or Nightmare 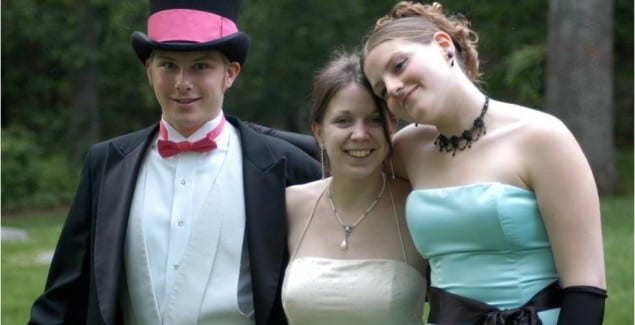 It’s the weekend before your kid’s senior prom. You and your wife are having a typical evening at home, perhaps watching a movie with your youngest daughter. And, there’s a kind of tense silence you remember all too well.

We all remember it.

Your son ambles downstairs and into the room, begging with his eyes for approval. Your younger daughter is sitting nearby.

“That’s a tuxedo,” you say. She ponders your answer for a moment.

“I know what that is, Daddy, but what’s that big black belt?”

She stares at her brother as he aimlessly pulls on his cummerbund, trying to make it feel more normal.

“It’s a cummerbund,” you reply, knowing this will likely yield further inquiries.

But you’re wrong. She has already made up her mind.

“It’s morantic,” the little one says. “I think he looks morantic.”

That’s how she says romantic. You and your wife crack up, but refuse to correct her.

“You look handsome. Very distinguished,” your wife chimes in. He is not pleased. He should have said something suave—a barb that would really get you guys going, such as “I do prefer it shaken, not stirred.” But 007 is not on his radar, though he is secretly thinking about how to smuggle the vodka he stashed away a couple of weeks ago into the event. And, that’s just what’s causing some of your own anxiety. What IS he going to do that could really be a problem?

And he’s still not pleased. He’s 18, after all. He’s not ready to be distinguished.

But still, he does look “morantic.” And so does his date. They’re playing dress-up now, strutting around your yard with other elaborately-dressed friends. They’re preparing themselves for “the big night,” one that you think can’t possibly live up to their expectations.

Because that’s really what prom is for: it helps us, with the best of intentions, get used to our failed expectations. We have yet to hear anyone say that the prom was perfect. Usually the stories of romantic mishaps and awkward waltzes are much more appealing in the forgiving spotlight of your shared and personal memories.

And don’t forget the potentially abrupt sharp turn that can separate the glamour of the dance itself from the debauchery of the post-prom festivities. No dress-up clothes now, no contrived formalities…just hanging out with friends and staying up all night—if you can. This is, of course, a source of genuine consternation. Will the post-prom experience be remembered for cut-loose celebrations, or for nightmares of over-indulgence, ungodly amounts of caffeine and a queasy stomach that refuses to give yield?

Ask around. Parents rarely wring their hands about the dance; it’s the after-party that they fear.

But for both you and your kid, it’s a seminal moment—much like a bar mitzvah, confirmation, or graduation. Such times are laced with hopes, high expectations, misunderstandings and tensions, and are symbolic of a kind of metamorphosis (hopefully not one that’s Kafkaesque, but rather on that’s transformative). Looking back in the big scheme of things, they’re just passing moments in time—not all that important in the long run.

So, for all those parents out there who are planning to launch their own poor kids into this great Western tradition, we would like to opine from our vantage points as child and adolescent psychiatrists, former prom attendees and, for at least one of us, a parent who has seen four kids attend three separate proms. Each one is unique in some ways, but all have one thing in common—intense anxiety in the face of unpredictable and unexpected mishaps.

From this iterative knowledge, we think we can comfortably assume some basic rules, first for the prom itself, and then for the after-prom. We hope that these rules make those cummerbunds and sequins that much more palatable by the end of the night.

“These things sure are tricky.”

“I remember pinning this on my date. Wooo, what a night! But then, you don’t  want  to hear about that.”

You’re right. They don’t want to hear about that. This is their night.

Now for the really tough stuff: what to do about the post-prom festivities.

You frown. At face value, this is a reasonable question. You talk with your wife. OK, maybe it would be safer at home. Maybe you would be better monitors then someone else’s parents. Maybe your kid can set an example.

No parent in his or her right mind should do this. The past practice of “social hosting,” when parents either provided alcohol or turned a blind eye, assuming it safer for their kids to party at home, is clearly against the law. While you may think it better to have your kid and his friends under your watchful eye, you are potentially facing serious legal charges if you go this route.

Some parents did this back in the old days, and like many life experiences, chalked it up to another one of life’s “near misses.” But, times have clearly changed. Just Google “social hosting” and marvel at the number of DAs who won’t hesitate to press charges. You don’t want or need that kind of trouble.

You might think it’s only a matter of months before your kid is off to college and free to do whatever he pleases, but keep in mind that you are the role model; kids really do watch and learn from your example. And, if you think prom worries are huge, remember that this is just one night—not four years of college angst!

These are, of course, very tough decisions. Usually the pre-arranged post-prom parties with designated chaperones are the safest bet. You can volunteer for that if you’re brave enough, though doing so will probably elicit that “whatever” eye roll from your progeny.

And don’t fool yourself. Even if a monitored post-prom party is taking place, there is still plenty of room for trouble and upset.

Grounding Your Teen For a Month for Missing Curfew

Rules For Dating In A Non-Dating World