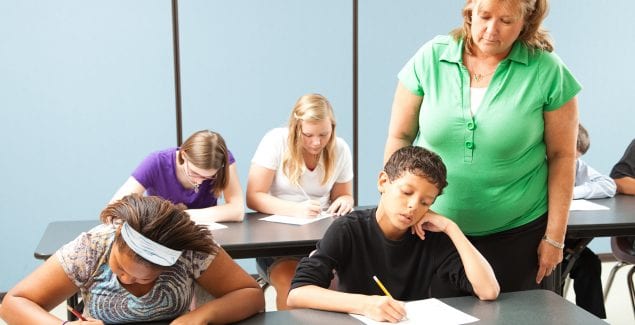 I have never been good at standardized tests. In fact, I’m horrible.

The problem is that in standardized tests, as opposed to general knowledge or understanding of a particular problem, you need to know what the specific question is looking for. But I just don’t think that way. I overthink every question.

While many folks are great at test-taking, I’m sure many can also empathize with my experience – if not personally, from watching it play out in their kids’.

And frankly, I’m not sure standardized tests are good for anyone.

As measure of knowledge and more, standardized tests don’t do what they are supposed to in assessing problem solving and critical thinking. Instead, they tend to measure a specific skill set – namely, the ability to perform well on these tests.

The No Child Left Behind Act of 2001 set the stage for using standardized tests to evaluate student knowledge and determine readiness for graduation and, if desired, college. This evolved into the Common Core – “a set of high-quality academic standards in mathematics and English language arts.” Its intention was to set goals in secondary school to ensure students were eligible for college. These goals say what children should know at the end of each grade. It has been adopted by 41 states and the District of Columbia.

But research shows that there is a big difference between being eligible for college, and being ready for college – that is, being able to handle the demands of college life, being open-minded, recognizing when help is needed, and more.

I would take this a step further. Success in college, and in the work world, goes far beyond mastering core knowledge. Let’s face it, most folks who lose or leave their jobs do so because of interpersonal conflicts, poor executive function skills, or problems with attitudes and behavior. That is, they don’t embody the social and emotional skills needed to navigate or be a useful part of the organization.

Increasingly many educators are rethinking the goals of education. And while it’s super important for our kids and young adults to be literate, and to maintain a sound foundation in knowledge of math, science, history, and literature, there’s much more to education than the accumulation of knowledge.

Though not mainstream, educators have realized that social-emotional learning is incredibly important. In fact, this kind of learning, often seen as “soft” or “fluff,” turns out to be really important in all sorts of achievement, including mastering the Common Core.

How Does Social and Emotional Learning Make a Difference?

The Collaborative for Academic, Social and Emotional Learning (CASEL) has taken the lead in defining this educational domain and identifies five core competencies and breaks them down into clear components: The data is clear. Social and emotional learning (SEL), when applied, has incredibly valuable outcomes. Here are a few examples.

Addressing kids’ trauma and trauma history (domestic violence, abuse and neglect, poverty, homelessness) through SEL focusing on positive education rather than punishment in the Ohio Avenue Elementary School in Columbus, Ohio has resulted in an A on the state’s accountability system compared with neighboring schools that received an F.

The Perspectives Charter School in Chicago decided to abandon the Common Core with a focus on a mandatory SEL program, A Disciplined Life. Despite only 8% of students passing the multi-state college-readiness test, 99% of Perspectives students were accepted to college, 91% entered college, and 44% graduated after 6 years. This latter figure is 10% higher than the city average.

The Robert Wood Johnson Foundation reports that an elementary school in Wisconsin demonstrated that attention to SEL keeps students away from negative coping behaviors, such as alcohol and drugs; increases academic performance; and increases students’ likelihood of graduating from college and having well-paying jobs.

The Downside of Focusing on Standardized Testing

The Hechinger Report notes that the Common Core at the very least fails to close the achievement gap – and possibly widens it – most often between white/privileged students and non-white/low-income students.

The focus on the Common Core fundamentally does not foster good teaching, as our educators are forced to “teach for the test” in place of overall student success. Our educational system focuses more on test outcomes than it does real in-depth learning. It does not foster independent learning and creative thinking on the part of our students.

An Opportunity for Change in Education

These considerations led to new U.S. legislation in 2015, the Every Student Succeeds Act (ESSL), which currently replaces No Child Left Behind and gives states the authority to redesign accountability measures, such as incorporating SEL into the curriculum and as measure of college readiness rather than outcomes on math and reading tests.

As a child and adolescent psychiatrist of over 30 years, a career educator, and a bad standardized test taker myself, I feel relieved by this outcome, though it is just a first step in transforming learning environments across the country to embrace SEL as a core educational competency. I think we’re headed in the right direction, but are just at the beginning of a fresh look at our educational system.

And as a clinician, I know that when kids learn the fundamental skills of social-emotional intelligence, it helps them build resilience, learn to regulate their emotions and impulses, and boost their self-esteem and confidence. This is crucial for all young people, and particularly for those with mental health challenges.

The fact is the Common Core has not improved student learning or performance on its standardized tests. Rather than focusing on numerical scores, we should be paying more attention on supporting teachers and fostering learning in our kids, both in and outside the classroom.