The Importance of Imaginative Play in Healthy Development 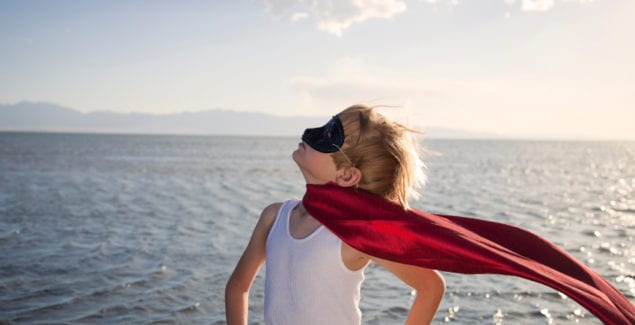 I thought it would be prudent to lead with that caveat. This post is about play—imaginative play, to be more specific—and, while I have no qualms with the notion that people of all ages “play” Pokemon, Go, that’s not the kind of play I want to discuss.

I was going to say that I want to write about “playing with myself,” but the adolescent boy in me recognizes the cognitive dissonance in that particular phrase, and the professional in me (who would like to keep his job) would like to merely issue this second caveat:

I will not call this post “playing with myself.”

But I am playing. That is, in fact, exactly what I’m doing in this lengthy, mildly puerile, somewhat pedantic, and probably a little bit irritating introduction.

Or, more accurately, I am being playful.

Because anyone who watches the news knows that the capacity to be playful is increasingly important these days. It allows us to tolerate stuff that we might otherwise find unbearable. This is especially true for our kids.

Little kids play. Bigger kids are playful. Adults play when they can. In fact, those might be the most fundamental precepts of human development. It has even been postulated that early hominids that were unable to engage in imaginative play lost the ability to survive. They became extinct because their lack of play prevented the necessary brain development for avoiding annihilation.

Could play, therefore, be tied to our very survival?

When I was a kid, I had time set aside, explicitly by me and implicitly by my parents, to engage in all sorts of imaginative play. I had a collection of pieces of bark from the firewood stacked in my suburban backyard. Each piece of bark looked a little different to the casual observer, but to me, each represented something uniquely special. There were spaceships, a bazooka, and an assortment of fighter jets. There were robots. There were guns, too. I figured if Captain Kirk had a gun, then I should have one as well. To be more precise, Captain Kirk had a “phaser,” but since he used it against the bad guys, it seemed that I ought to have one of those also. Some of those pieces of bark definitely turned into phasers.

My backyard turned seamlessly into the outer reaches of space at warp speed. It was the battleground where I fought for liberation from mysterious and nefarious robots. I ran around my yard and skidded behind trees that were barren in winter’s gloom and alive with the downy green of spring. But, none of that mattered. My backyard, regardless of the season, was the inside of a giant blimp steered by aliens who, for unclear reasons, needed a blimp from which to fire their neutron torpedoes. I got shot by bullets, and by lasers, and by darts filled with truth serum, but I always survived. I rescued, over and over again, a girl named Shannon O’Mcelvaney who probably didn’t know I existed but who in “real life” sat two desks down in my second grade classroom.

There’s the developmental kicker: it was second grade. I was 7 years old. If I told you that these were the hi-jinks of a teen, you’d be rightfully worried. But at age 7, these hi-jinks were essential for me to work through my issues. I didn’t know it, but I was contemplating problems. I was figuring out how to manage my conflicts. I was working to reconcile my own aggressive feelings, as well as explore my anxieties and dreams. As such, the spaceships, the bazookas, and everything else were completely real. And believe me—if I had spent the day at school conjuring up some new adventure only to get home and be reminded of a forgotten dentist’s appointment or visit to my grandmother—well, let’s just say I was in a bad mood pretty quickly.

To put this all into perspective, consider this solitary fact: My sister, a year younger than me, had a sponge-like capacity for collecting incriminating information. She was devoted to ridiculing me at every opportunity. She spied on my relentlessly during my back yard escapades, and I didn’t even care.

That’s how much I needed to play.

All of this begs a few fundamental questions:

And yes, I am aware that these are leading questions.

To be clear, I am not dissing Pokemon Go. Pokemon Go can be pretty cool (when played safely, of course). But, Pokemon Go is directed play. There are rules and directions. The free-form, all-by-yourself, made-up world of the small child is a completely different thing, and utterly normal. We’ve been doing this kind of play since we became human, and some animal behavior experts would argue that we’ve been doing it long before that. After all, there is evidence that rats play, that dogs play, and that guinea pigs play. Pretty much anything with a central nervous system plays.

This is because play is practice—and, it’s this practice that makes play so important. There is even evidence that play by itself leads to more profound brain development. Give a rat a maze, and its brain grows faster and more intricately than a rat in a boring ol’ cage. But, give a rat a cage with cool stuff—the rat equivalent of my childhood backyard—and that rat’s brain grows by leaps and bounds. In fact, there is growth in both the prefrontal cortex and the cerebellum. What’s more, there are multiple studies that suggest that imaginative play spurs executive function; it happens in rats, and it happens in humans.

Do you see why I’m a little nervous?

But, if play is where we conjure our conflicts and learn to tolerate our mixed emotions, we need to make time for it too. After all, it sure seems that we’re getting worse at tolerating our conflicts.

And yet, that’s exactly what play is for.

Creativity Gives Our Brains a Boost: Shrinking It Down (Season 1, Episode 12)