Mark, age 13, was referred to my office for an evaluation because he had just set his third fire in the house, and this time the fire led to thousands of dollars of damaged furniture. He had been suspended from school for breaking windows and spray-painting graffiti on the outside of the school building. One of his teachers suspected that he had stolen money from her purse. When confronted with what he had done, he lied and denied any wrongdoing. Mark’s parents were wondering if a military school was the answer as their local public school was unwilling to take him back unless he got help. What troubled them the most was that he seemed to have no remorse for his behaviors. Punishment had little effect on him, and they were worried about his future. They wanted to know what was wrong and what they could do to help.

In hearing Mark’s history, I knew he showed signs of conduct problems or antisocial behaviors. Children with conduct issues display a wide variety of rule-breaking and disruptive behaviors. The behaviors can range from swearing and temper tantrums, to stealing, truancy, vandalism, and assault. These types of behaviors are those that violate family and societal expectations and the rights of others. The causes and outcomes of children with conduct issues can vary greatly, ranging from minor disobedience to criminal activities. They tend to be more common in boys than in girls, and usually show up during childhood though the gap narrows in adolescence.

Mark’s behaviors clearly included a mixture of delinquent and aggressive behaviors and, after a thorough evaluation, I diagnosed him with Conduct Disorder.

What is Conduct Disorder (CD)? 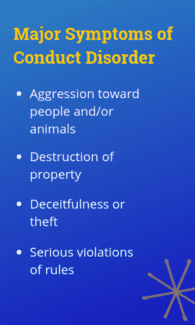 Kids with Conduct Disorder (CD) violate the basic rights of others. They are aggressive to the point of being cruel to people or animals; they destroy other people’s property; they may lie, cheat, skip school, defy their parents’ rules, or run away from home.  Stealing, shoplifting, forgery, breaking into homes or businesses, and harming others can all be part of this diagnosis. It is more common in boys than in girls, and the disorder usually begins by age 10 years, which is called childhood-onset type.  In some cases, a child shows no problems until after age 10 years, which is called adolescent-onset type.

Children with a milder form of CD often improve over time, but in severe cases these symptoms can persist into adulthood. Children with CD often have other comorbid (or coexisting) disorders such as depression, anxiety, substance-related disorders, learning disabilities, and ADHD. It’s important to note that most children with these other disorders do not develop CD, but rather many children with CD do develop – or already have – another disorder, as well.

Although no one knows definitively what causes CD, genetic and biological factors, as well as households with significant family conflict, have been identified as possible causes. CD is more common in households where there are parents with alcohol or substance dependence or mood disorders; this doesn’t mean that every child with CD grows up in this type of home. Some researchers have also noted that the high rates of family conflict in children with CD may be the result of parenting a child with behavior issues, rather than the cause.

For example, Mark, grew up in a home where it was “dad’s way or the highway.” Sometimes dad’s way included physical punishment such as spanking with a paddle or a belt. In fact, Mark’s father told me, “If my wife had let me hit him more, we wouldn’t be in this situation.” Unfortunately, physical punishment has not been found to be an effective treatment strategy for children with CD and, in fact, Mark’s father might have made things worse.

How is Conduct Disorder Assessed?

Psychologists use multiple assessment methods to assess CD.  These can include interviewing the parents, child, and teachers; having parents, child and teachers complete behavior ratings scales; and directly observing the child or adolescent in the home or school setting.  Even though the child has the “problem,” the psychologist will spend more time interviewing the parents than the child.  This is because children (especially children under the age of 9 years) aren’t very good at reliably reporting their symptoms.  In other words, children with conduct problems don’t usually think they have a problem.  However, the psychologist will definitely take time to talk directly to the child to get the child’s understanding of why he’s been brought to treatment.

When the conduct problems involve classroom performance, interviewing the child’s teacher or teachers is essential and if this is the case the psychologist will ask for written permission to communicate with the teacher.  The psychologist will also typically ask about the child’s medication and developmental history to determine whether a medical or temperamental issue might be contributing to the behaviors.  The psychologist will also want to “rule-out” whether the child has a co-existing condition such as depression, anxiety, or ADHD.  Many children with CD have problems with peer interactions and this is an area that should also be assessed.  Finally, if the conduct problems appear to be connected to school performance, it is important that a more thorough evaluation of the child’s academic, intellectual, and neuropsychological functioning be pursued.  I have many times conducted neuropsychological evaluations of adolescents with a diagnosis of CD, only to find out that they had suffered from an undiagnosed dyslexia or learning disability.  The roots of their oppositional behavior could be traced to the fact that school was difficult for them – and not because they weren’t “trying hard enough” but because they couldn’t read or write.  Thus, when assessing externalizing behaviors, a comprehensive approach to the assessment is imperative.

How is Conduct Disorder Treated?

Generally, the earlier a child gets treatment (particularly before 13 old), the better the outcome.

Research on children with CD indicates that most children with the disorder will have it (or at least aggressive behaviors) for a long time, and so intensive treatment that incorporates a combination of behavioral and family approaches is important.