What is Anorexia? | Clay Center for Young Healthy Minds 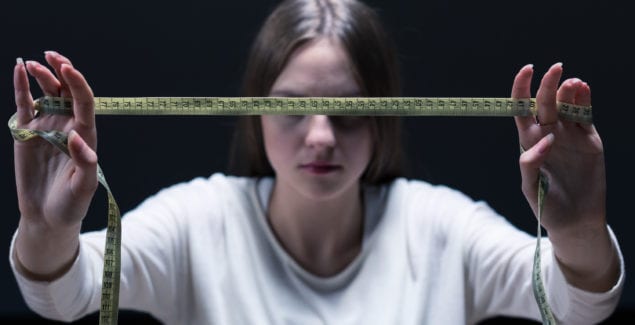 For more information about eating disorders and ways you can help make a difference for a young person in your life, or for yourself, please visit NEDA the National Eating Disorder Association website. #NEDAwareness

Marsha was never satisfied with her body during middle school.  She would complain she was fat and refused to eat, despite the entreaties of her mother and everyone around her.  By age 15, when she arrived at her psychologist’s office for the first time, she looked like a walking skeleton.  She had spent the last 3 months eating nothing but carrot sticks and small bites of protein bars.  Whenever she had free time, you could find her exercising in her room or at the gym.  Her mother had become concerned the week before when she went to hug Marsha and realized she was “nothing but bones.”  She had also noticed that Marsha’s once thick blond hair now hung down in strings and her complexion was yellow and sallow.  When the psychologist asked Marsha how she thought she looked, Marsha said, “I’ve never looked better.”

Anorexia is characterized by a refusal to maintain a healthy body weight, which is typically defined as 15% below normal for a child’s height and weight.  Most people with anorexia feel just as Marsha does – they think they look great when they are at their thinnest and oftentimes still unsatisfied with the low bodyweight they achieve. In fact, they will think they look fat even though they are actually frail and very thin. Girls with anorexia fail to have menstrual periods. Even though they restrict their food intake, they are typically obsessed with food. For example, Marsha’s favorite shows were cooking shows and she often enjoyed cooking the family dinner even if she never ate a bite. In her free time, she could be found reading cookbooks or exercising. Despite her obsession with food, she ate very little and would obsessively control her caloric intake – sometimes eating only 400 calories a day.

There are two types of anorexia: the restricting type and the binge-eating/purging type. Marsha suffers from the restricting type because her symptoms include the following: refusing to maintain a normal body weight; an intense fear of gaining weight; and a distorted way of thinking about her body in that she experiences her size as much larger than it actually is. Those with restricting anorexia tend to achieve their weight loss by fasting and/or excessively exercising.  In the binge-eating purging type, the child or adolescent engages in regular episodes of binging (overeating to the extremely) or purging (vomiting after overeating). This isn’t the same type of pattern as bulimia. Those with bulimia tend to eat large quantities of food before purging, while those with the binge-purging type of anorexia tend to eat small amounts of food and then purge more consistently and “thoroughly.”

Anorexia typically develops during adolescence, with peaks at ages 14 and 18. Children who have not yet reached adolescence can be diagnosed with anorexia, but it is rare. Some adolescents just experience one episode of anorexia, while others “yo-yo” between periods of fairly normal weight and underweight. 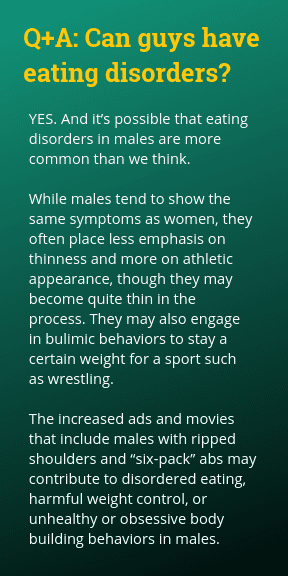 Q+A – Can guys have eating disorders?

Anorexia is a very serious condition because extreme weight loss can lead to a number of significant medical complications such as heart problems, dental problems, loss of bone density, anemia, hair loss, and hormonal changes. The disorder can be life threatening and some statistics indicate that up to 10% of individuals with anorexia lose their life as a result of the disorder, although half of those cases may result from suicide.

If you or a young person in your life is in need of support and you are not sure where to begin, you start searching for help and support through NEDA.

Hope Beyond Anorexia – Shrinking It Down (Season 1, Episode 9)