I’m often asked if ADHD is “overdiagnosed.” Attention Deficit Hyperactivity Disorder (ADHD) is one of the most common – and some might argue one of the more impairing – childhood disorders.  Approximately three to five out of every 100 school-aged kids meet criteria for ADHD. Interestingly, research has shown that ADHD is both over and under diagnosed.

There are some children who are diagnosed with ADHD who shouldn’t have been. In these cases, the children may actually have other disorders, such as a learning disability or an emotional disorder that cause their behaviors to look like ADHD, or they may not have any disorder at all but are given the label of ADHD anyway. 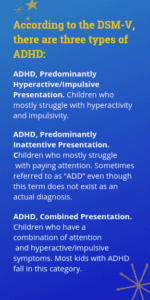 At the same time, other children – girls in particular – with attention issues tend to be underdiagnosed because their challenges don’t typically cause difficulty for anyone but themselves. Samantha, a 14-year-old that I evaluated, was one such case. Year after year, teachers referred to her as “spacey,” “disorganized,” and “inattentive,” but she wasn’t evaluated for ADHD because it was thought these behaviors were under her control and because she wasn’t causing problems with her classmates.

Children with ADHD tend to have challenges with some combination of impulsivity, hyperactivity, attention, and distractibility. ADHD is three to six times more common in boys than in girls, though – as mentioned above – some researchers have indicated that girls are underdiagnosed because their symptoms cause fewer problems for others, and therefore not referred as frequently for evaluation.

Overall, research suggests that there are many factors that play into the question of appropriate diagnosis, including the gender of both the child and the clinician. Boys are more likely to get a diagnosis of ADHD and male clinicians are more likely to give a diagnosis. Taken together, in order to avoid a misdiagnosis of ADHD and premature treatment, it is crucial for clinicians to not rely only on intuition but to strictly adhere to well-defined, established diagnostic criteria. It is also important to get information from multiple sources, including parents and teachers, and to use standardized diagnostic questionnaires and checklists.

Does My Child Have Attention Deficit Hyperactivity Disorder? How Would I Know?