How To Help Your Kids If You Are Getting A Divorce

How To Help Your Kids If You Are Getting A Divorce 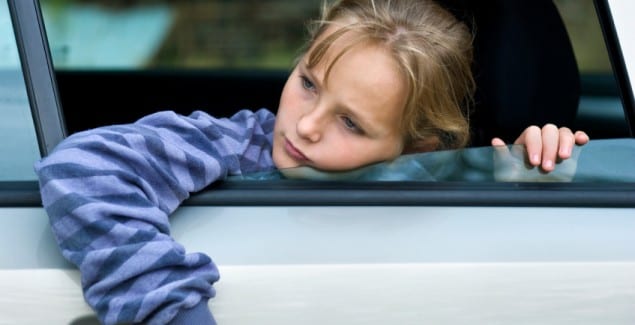 Posted in: Grade School, Pre-School, You & Your Family

We emphasize often the emotional weight that every child carries.  About 1 in 5 kids will have a psychiatric disorder at some point during their childhood or adolescence.  But, if you really want to talk high numbers, take a look at divorce.  While the rate of divorce has been slowing, estimates still place the incidence of divorce at somewhere between 40% and 50% of all marriages.  Still, this is a bit misleading; this isn’t the same thing as saying that about 4 out of 10 marriages end in divorce.  This often-quoted number comes from the fact that in a given year, there are approximately one-half as many divorces as there are marriages.  In other words, 100 couples might get married, and 50 or so different couples might call it quits.

A better number to look at comes from the CDC.  The Center for Vital Statistics at the CDC notes that in 2011, about 3.6 people out of a thousand were divorced, whereas 6.8 out of a thousand were married.  The point of this post is not to address statistical interpretations, however; the goal here is to ask a more compelling question: Why does the CDC—the Center for Disease Control—keep track of such data?

Well, it’ll probably come as little surprise to find out that divorce is associated with all sorts of difficult times, be they financial, emotional or familial in nature.  Such hardships hit children especially hard—just  look at this one striking statistic: about one-half of school-aged kids whose parents divorce miss a year of school.  Why does this happen?  Children, no matter how hard we try to protect them, often inevitably develop conflicted, angry, sad, confused and simply bewildered emotions when divorce strikes home.  Younger children might think it is their fault.  Older teens might blame one or the other parent.  There are trust issues that pervade the dating and relationships of the children, and the marriage choices of those children can be profoundly affected.  When we talk about the emotional burden on kids in our society, we need to consider the ramifications of divorce as serious players in the difficult lives of children.

Here’s an example.  Julie recalls that her parents were often arguing when she was little.  She could hear them downstairs, and would stay up late at night wondering what she has done to make them so mad.  They weren’t, of course, arguing about her, but when you’re 5 years old, it’s easy to believe that everything you do has powerful effects on your parents.  Julie knew about divorce—it had been the subject of a Disney movie she had watched—and she had also heard from her parents that while parents may argue, they still love each other a great deal.  In fact, her grandmother had even told her that arguments among parents are pretty normal, and Julie tried to take some solace in her grandmother’s wise words.

Then, when Julie was 8 and her little brother 5, her parents sat them both down in the living room. Julie said that she knew even then that things weren’t right.  “They hadn’t been talking,” she recalled in her therapist’s office.  “They ate separately, and didn’t smile.”

Out came all the news at once.  For some reason, her parents served ice cream when they told her.  They were divorcing, splitting up, and her father was moving out.  “Moving out of what,” she had asked, and her father had cried for the first time that she could remember, explaining that he was moving into an apartment.

That which followed for Julie and her brother was dizzying.  Visitation with her dad on weekends, strange moments when her mom asked her dad for “the check,” hopeful moments when her parents sat next to each other at school plays, and dashed dreams when they left in separate cars.  She started to sit still in her chair at school, the previously rambunctious child now seemingly frozen, afraid of further transgressions.  Her parents finally agreed, at the request of the school and Julie’s pediatrician, that she see a therapist.  Now 11 years old and still in therapy, Julie recalls feeling incredibly guilty for her parents’ separation.  She still feels badly when she expresses anger at one parent or the other, and the therapy is a useful and welcome reality check for her to air her confused and conflicted feelings.  Despite herself, she still wishes her parents would come back together.

Is this case emblematic? Not exactly, as every case is unique.  But Julie’s story does have a good deal in common with the trials and tribulations of other divorced kids.  The guilt, the academic and social challenges, the confusion, and the hopes are common themes.  Almost everyone who works with children is familiar with these challenges.

That’s because, as we noted above, many American children are affected by divorce each year. Those youngsters often feel trapped in the middle as the family splits up. If Mommy and Daddy don’t love each other, they wonder, do they love me? Anger, fear, separation anxiety, a sense of abandonment, self-blame, sadness and embarrassment are common reactions for most children. To make matters worse, the stress of the divorce of itself worsens the parenting skills exactly when they are most needed.

Here’s a good place to start: you can help ensure a healthier transition for your children when you tell them you love them—and when you do so often. Moreover, ensure that they are able to build the most stable relationship possible with both parents.  Finally, although it may be difficult, always be open and honest: “Sometimes people who were in love stop loving each other, but parents never stop loving their children.”  This will go over OK with a pre-adolescent, but with the surly and already-cynical teen, you may have to endure some mixed and angry feelings.  That doesn’t mean you don’t tell them that you love them; just anticipate that they are likely to push back.  However, just explain in age-appropriate terms the basic reason for your divorce so your children know they’re not to blame.  Most importantly, keep your kids out of it—your divorce is between you and your spouse. Don’t use your children as pawns, spies or marriage counselors; instead, provide consistency for them by coordinating with your ex-spouse the same house rules, and plans for bedtime, curfew and favorite foods.

If you do nothing else, do this: remind your children that they are loved, and show them this by being steady and dependable.  Children are amazingly resilient and understanding, and they’ll take in what you say even if they seem not to at first.

Julie did OK.  She was able to tell both her parents how sad she was that they had grown apart, and she was able to garner explicit promises from both that they would not grow apart from her.  She still felt loved, and eventually got back on track.  While it wasn’t easy, it wasn’t the confusing disaster that she had first feared.

The Impact Of Divorce: All Children Only Get One Childhood