How Scary Is Too Scary? | MGH Clay Center for Young Healthy Minds 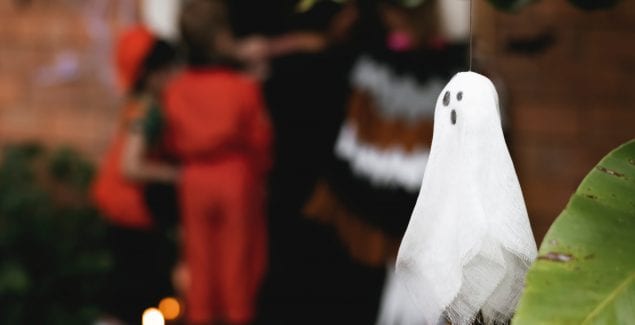 Here is my most vivid memory of Halloween as a child:

I’m 8 years old. I have, to my father’s delight, developed an affinity for the “creature-features” that appear on the old UHF stations every Saturday from 10 AM to noon. I love Boris Karloff as Frankenstein and Bela Lugosi as Dracula. I am literally shaking in anticipation when I watch the original Dracula, and then, because the movie (though brilliant), doesn’t hold up all that well in the eyes of an 8-year-old who is, after all, about three years away from the dazzling special effects of Star Wars, I tell my dad that the 1938 Dracula just wasn’t that scary.

This leads my parents to make the reasonable decision that the three of us will embark on a family outing while my younger sister is at a friend’s house. My mom, dad and I grab some burgers, and then, as it’s mid-October, we pay money at the door of a converted warehouse in downtown Kansas City that has been transformed into a make-shift haunted house. My dad is tickled by the adventure, and though my mom is dubious as to the child-rearing judgment in this family moment, haunted houses were less common then than they are now, and my father is particularly determined. Like a typical episode of Modern Family, we head on in.

“This’ll be nothing, Tiger,” my dad says, and I smile, because I like it when he calls me ‘Tiger,’ and I’m proud that he’s proud that I wasn’t frightened of Bela Lugosi.

But I am completely terrified.

We spend the rest of that awful afternoon with my mother announcing loudly to all who could hear us in each room of the warehouse that her “son is very, very scared,” and therefore, most of the ghouls leave us alone. We are in and out of that warehouse in about 13 minutes, but it feels like a month.

I thought of this story today as I was asked yet again the same question that I am often asked this time of year:

How scary is too scary during the Halloween fright season?

There is, of course, no clearly drawn answer. In this age of seemingly constant parental worry, moms and dads understandably consider the terrifying, yet unlikely possibility that they might irreparably scar their children if they don’t get things exactly right on all fronts. These worries apply as much to complicated issues like bullying as they do to seemingly mundane concerns like Halloween appropriateness. Here in Boston there are haunted forests, haunted amusement parks and marathon scary movie nights in local cinemas and on TV. Where can you comfortably bring your child for a little October fun?

It’s actually a question worth asking.

One of the first things I learned in my child psychiatry training is that parents are the best judge of what their kids can handle (notwithstanding my parent’s ill-fated decision to take me to that haunted house).

If you as a parent really love this stuff (and my dad did love old scary movies), then you’ll need to be extra careful in assessing your child’s capacity to enjoy the same material. This is because we parents often want our kids to like what we like so much that we may inadvertently subject them to our likes before they’re ready to endure our affinities. Realistically speaking, you are unlikely to do any real harm if you use good judgment, but that isn’t of course the same thing as saying that it’s OK to knowingly do harm. In fact, after that haunted warehouse trip, both my mom and my dad apologized to me—and it was probably that apology that makes me remember that experience so fondly. Parents, even on Halloween, are allowed to mess up. They just ought to acknowledge to their kids that they’ve made a mistake.

Having said that, it’s always good to think developmentally and psychologically. There is, indeed, a body of literature suggesting that some forms of entertainment can be traumatizing to vulnerable individuals. At the same time, there’s a debate in the literature about the possible service that scary stories may serve in the course of healthy development.

My goal here isn’t to do an exhaustive review of the research; it’s just to point out that others have thought a lot about these issues, so we have some data to go on as we plod forward toward October 31.

As are very fond of saying at The Clay Center, think developmentally.

For the younger ones:

Adolescence, of course, gets more complex:

But you know what? You’ve got this. Parents know best. You just need to be active in acting on what you already know.

Should the TV Be On or Off During Times of Breaking News?