The Power of Music: To Feel, Heal, and Connect | MGH Clay Center for Young Healthy Minds 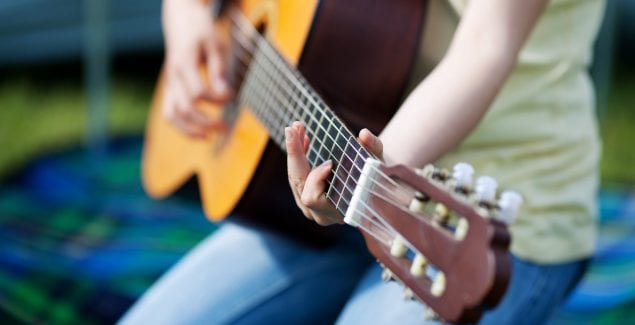 The best music is essentially something to provide you to face the world with.

Music doesn’t lie. If there’s something to be changed in this world, then it can only happen through music.

I dropped out of medical school to be a musician. Well, at least I tried.

In retrospect, I was not ready to become a doctor, and I avoided class by playing music with a sitarist. He told me about an opening in the Philosophy Department where he was a junior professor. It seemed like a great opportunity, even though I only took two philosophy courses in college.

So, I tried to drop out of medical school. My Dean refused to let me withdraw, told me to take my time, and put me in a dual-degree program so that I could take time to study philosophy and then return to my medical education. Reluctantly, I agreed. It turned out to be the best decision I ever made, and I’m forever grateful to him.

After just two years, I re-entered medical school. But those two years gave me the time and chance to hang out and play with other musicians – not for money, but for fun. Those hours and hours of just making music changed my life.

I learned to listen. I learned to play what came to me in the moment. I learned not to be scared to play the wrong note. And most of all, I learned how to connect with others and help them sound good in the process.

Fast forward about 15 years. I became a doctor and had four kids. And what’s most precious to my family is sitting in a living room around the piano singing with a bunch of friends. It’s a holiday tradition. There would be no Thanksgiving or any other celebration without our getting out the guitars and any other available instruments.

Mind you, it’s not always pretty. Our harmonies are usually off. Our timing is generally poor. But we get wrapped up in it and go on most of the night. Everyone feels great – and we’re feeling it together. That’s the magic of music.

Music has a human effect, across cultures

There’s something universal about the creative arts that’s good for health, and mental health in particular. Visual arts, drama, literature, music, despite their differences, all have some things in common – they make us feel, provide meaning, stimulate reflection, and bring us together.

Our brains are wired for music, and this is likely one of the major reasons for its universality. Research has shown that the pentatonic scale, in all cultures, is a means of coordinating infant and maternal communication. The pentatonic scale is commonly used in traditional music around the globe.

This has led many scientists to postulate that the way our brains are constructed is receptive to this particular scale. Studies show that we are attracted to and utilize scales, like the pentatonic scale, that are built upon the natural harmonic series of notes.

There is more evidence. Researchers have found that we are drawn to certain intervals of notes (two notes played together or in sequence) because it resembles speech. For example, the minor third which has been known to convey sadness. Studies have shown that the very same interval is one in which sadness is perceived in human verbal communication. If the minor third is universally evocative of sadness, it not only suggests how our brains are wired, but also reinforces the fact that music causes us to feel certain emotions.

The bottom line is that in all cultures, all over the world, music has a special place among humans (and other animals as well), and it affects us in characteristic ways. We’ve all felt it, in some way. We don’t need science to tell us this!

The fact that music evokes emotion is obvious. And not only does it make us feel happy, sad, or want to get up and dance, but certain melodies are embedded in our memories.

So, when you hear a tune from a scene in one of your favorite movies, it immediately takes you back to the same feeling you had watching that scene. I bet you can come up with one immediately.

Or when you’re driving in your car and an old song comes on that you heard with your first teenage love, it brings you back. That song – maybe even “your song” – still has meaning, long after the relationship faded. You still feel the feelings. Even though he or she broke up with you and you were devastated, you might smile because when you were in the car together you felt good. Or maybe it’s sadness you feel in hearing the song again, in a nostalgic way.

Or think about how you feel when you’re in the ballpark and are singing the national anthem, and tears come to your eyes; or in the seventh inning stretch when you chime in to “Take me out to the Ball Game,” and your tears well up, because you remember singing it with your dad.

Or consider when Igor Stravinsky’s Rite of Spring was first played in Paris and it sparked a riot.

You get the point.

Music is the best studied of art therapy, and helps to lower anxiety, depression, trauma, psychosis and stress. Important components of music therapy are the meaning of lyrics, improvisational music playing, active listening, and songwriting.

But it’s not just in psychotherapy.

While many of us cringe at the horrors of “elevator music” or the awful music we hear waiting on the phone after all the prompts, music has been shown to have a soothing effect.

For example, it is frequently used in dentist’s offices and in operating rooms. Music has also been shown to reduce pain, and even have a positive effect on symptoms of stroke and dementia. And for patients with Alzheimer’s disease, it’s benefits may well be that singing and listening to music improves mood, helps retrieve old memories, and could even improve general thought processes.

Music has a unique ability to inspire changes in individuals and society.

Beyond the individual, music plays a vital role in society, and in social change.

What movement in history is without an anthem – a theme song. Whether we’re going to war (Yankee Doodle, The Battle Hymn of the Republic, It’s a Long Way to Tipperary) or whether we’re fighting our own battles at home (Union Maid, That’s What Friend Are For), music serves as our foundation.

And think about how we use songs in our own lives to mark major changes – births, deaths, anniversaries. It’s why the first dance at a wedding is so important.

The power and the ability to change ourselves and change the world is almost always coupled with a soundtrack of one kind or another.

So, back to family holidays, or remembering young love, or being in the ballpark. In these scenarios, the music is about feeling connected.

The euphoria of a concert is not just that great music is playing. In fact, the last time I went to a concert in a large venue, I could hardly hear the music – certainly not as well as I could with my headphones. Concerts like this create unity.

The same is true in church, temple or in most spiritual communities. There’s something really special about the way the music sounds. It’s not just the acoustics of the cathedral. It’s the power of music to make us feel communal. And it may be that which unites us through music also connects us with something bigger than ourselves –that helps us feel a part of something beyond this planet.

As a musician, let me close with one request.

Encourage your kids to make and experience music with others. And if they’ll let you, make music with your kids.

I don’t care how good or bad you or your kids are at it. Join in. Become a part of the music.

Listen To Your Kids, But Not Necessarily To Their Music

Concert Girls: How A Few Shared Experiences Helped A Mom And Her Teenage Daughter See Each Other’s Lives Differently