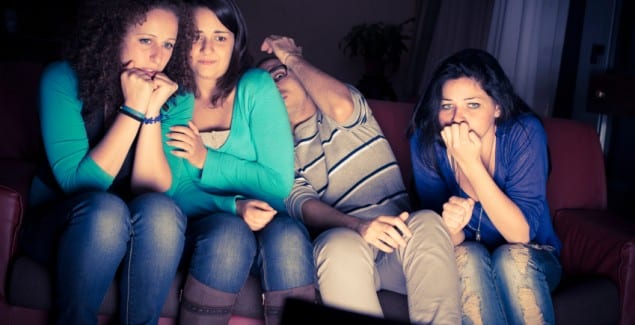 Before we get into the details of this post, I gotta come clean.

I love movies, and TV, and all sorts of visual media.  It is universally accepted that the writing on the screen has gotten better, more nuanced, more sophisticated, and more engrossing.  I have binged on quite a few shows; with today’s technology, that’s possible.  I have watched nearly all of Freaks and Geeks in a single sitting, for example.  And, I think I could have watched more.

I suppose this illustrates the especially complicated issues surrounding television these days.  Many parents will recall when movies such as The Wizard of Oz were neighborhood events.  Everyone knew when it was on, and on those evenings, the whole family settled in to watch.  Who knew back then when Dorothy would come to our living rooms again?

But now with Hulu, iTunes, Netflix, Amazon Video and so on…and so on…we can pretty much watch whatever we want, when we want, as much as we want.  The content can show up on our tablets, our computers and our smart phones.  You can’t simply pop your head into the living room and tell your kids to turn off the TV; limiting what, and how much, they watch now takes substantially more vigilance and craft. Things have changed at a dizzying pace.

The fact that TV writing has gotten so good, the fact that “TV” can now be watched anywhere, anytime and on a number of devices, and, perhaps most importantly, the fact that content on TV has shifted heavily toward intense, sometimes unsettling dark realism, explains why mental health clinicians are often asked by parents some key questions:

How much is too much?

What can I do to limit access if I’m worried?

Welcome to monitoring what kids watch in the 21st century.

Before we address today’s changes, let’s just take a moment to address some of the shifts in TV patterns that have occurred in the last 40 years.  That’ll help to put our conclusions into perspective.

In 1950, only 10% of homes in the United States had TVs. By 1996, however, approximately 99% of U.S. homes had televisions, with 54% of children having TV sets in their bedrooms, and spending an average of 28 hours per week watching TV.   It would seem that even before technology brought TV onto our laptops and smart phones, kids were watching a lot.  This means that the pull of TV programming is powerful, and only getting stronger, though, this is hardly a new revelation.  The real question is whether TV can make kids act differently.  Specifically, do kids get more promiscuous or more violent from watching violent or sexually provocative content?

After examining more than 10,000 hours of TV programming between 1994 and 1997, the National Television Violence Study (Mediascope, cited in Beresin, 1999) concluded that young people view about 10,000 “acts of violence” per year. More than half of all TV programs have violent content, and this study happened before we had shows like The Sopranos, Breaking Bad and True Blood.

Earlier data also show that “attractive perpetrators” commit about 38% of violence.  More than half of these acts are accompanied by neither pain nor remorse. Again, before the most modern programming was available, Comstock and Strashurger (cited in Beresin, 1999) suggested that children’s programming contains about 20 violent scenes per hour, compared to an average of 8–12 scenes per hour in all programming. These numbers, however, include the “violent acts” that occur in cartoons, and whether the obvious unreality of cartoons protects children from exposure to violence has yet to be examined rigorously.

Here’s where things get particularly murky.

Think of the nuance that has occurred in television since those studies were completed.  Kids might watch Dexter, for example, and wonder how such an attractive and likeable perpetrator can also saw bad guys in half with a buzz saw.  No wonder these shows are “binged” upon.  It makes sense that we all watch these shows in rapid progression, given that we are likely grappling with fundamentally moral issues.  Robin Hood robbed the rich and gave to the poor. Dexter, a forensic investigator, tracks down murderers and tortures them to death.  There are legitimate analogies between Robin Hood and Dexter, but the differences exist largely as a function of degree.  Robin Hood just ain’t Dexter. Whether that’s good or bad almost doesn’t matter, since shows like Dexter aren’t going away.  What matters is how to know what specific kids can handle.  Certainly the proliferation of TV and TV violence has led many to blame TV viewing for such problems as juvenile obesity, poor communication within families, and aggressive behavior by children and adolescents.  But, what can we do about this?

The American Academy of Pediatrics suggests that children watch no more than 1 to 2 hours per day, and that parents watch programs with their children both to monitor content, and to generate discussion and communication. The American Psychological Association has recommended a rating system similar to the motion picture system to assist parents in choosing appropriate TV programming for their children. These recommendations stem from a growing body of research suggesting that violent and risk-taking behavior increases among young people who frequently watch television.

More recent services include websites such as Common Sense Media. This service summarizes current programming, and makes clear recommendations on what ages are most appropriate for each show.  For example, it calls Dexter a show that is “clearly not for kids.”  The Walking Dead, a similarly violent show, but admittedly more outlandish because of the fantasy content (there are no zombies, after all), is rated appropriate for 16 years old and up.

Through the stories that appear on television, adults can develop an alliance with children and adolescents. There are relationships and choices that are much easier to ponder in displacement than in real life.  Gay parenting, as depicted in Modern Family, “geek chic” as shown in The Big Bang Theory, and existential quandaries about life and death that frequent the thematic content of The Walking Dead are all more easily tolerated and contemplated on the screen.  In fact, a more balanced approach to media should involve a careful discussion with young viewers about what they value in the characters and plots of the programs that they enjoy.  Aggressive feelings are, after all, part of being human, and if we censor TV programming without understanding its potential value, we suggest to young people that their feelings are wrong and inappropriate.  Adults should also remember to consider content in terms of developmental appeal and appropriateness. A 5-year-old should never watch The Walking Dead, although most teenagers will be fine with this program.  Further, it never makes sense to force a child or adolescent to watch anything that they don’t want to.

If you feel a bit uncomfortable with the subjects of this post, and the programs that are mentioned, that’s understandable.   But consider this: Many of these issues are nothing new.  Homer’s Odyssey appears in many ninth grade curriculums where students read the following passage:

But Odysseus aimed and shot Antinous square in the throat and the point went stabbing clean through the soft neck and out—and off to the side he pitched, the cup dropped from his grasp.

Few would suggest that Homer’s epic be struck from the canon for its violent content, and were a decent movie version available, millions of 14-year-olds would watch the story. Yet, here are violence, revenge and carnage at their worst. What makes the Odyssey acceptable, is the extent to which students understand the story (with the help of their mentors) in terms of the larger context of Odysseus’s plight. At age 14, students can begin to understand Odysseus’s strengths and weaknesses; that is, they are developmentally primed to appreciate the story’s complexities.

So, where does this leave us?

To start with, clinicians ought to obtain, and parents and kids need to be ready to provide, a “media history” for their doctors and therapists:

The 15-year-old who is overweight, gets little exercise, does poorly in school, and spends 4 to 6 hours a day in front of a screen, is likely spending too much time at this single set of activities.  It’s therefore worth wondering what this child is avoiding, and why.  Alternatively, the relatively fit young woman who watches 2 hours a night, is disciplined with her work, and performs well academically, is probably doing just fine.

You get the picture.  Don’t just stop after you ask how much a kid watches.  For goodness sakes, don’t just make blank rules—ask questions.  Engage the child or adolescent in a discussion.  After all, it is from discussion that we get nuance, and many of the most watched programs and video games today are laden with the nuance that kids so clearly enjoy.

How To Talk To Your Kids About Internet Pornography