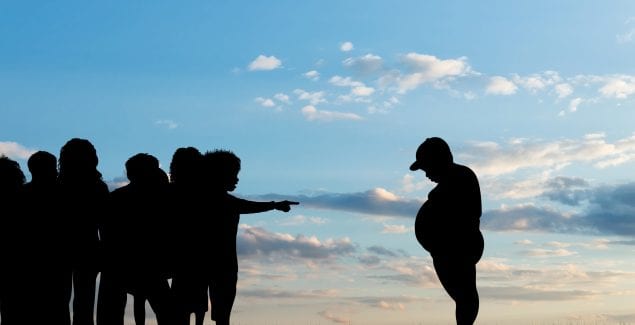 Think about these questions:

Where do people learn that it is OK to call someone fat?

Where do kids learn that calling someone fat is tacitly acceptable bullying?

Can you think of another health condition for which kids are so easily ridiculed?

This is national childhood obesity awareness month.  There will be all sorts of blogs and public service announcements about the problems of obesity in this nation, and there will be special attention paid to the growing problems among obese youth.  A lot of this will tell you things that you already know.

You already know much of these talking points because the problems attached to being too heavy have been stubbornly resistant to intervention.  Still, it’s worth a quick review.

The formal definitions for “overweight” or “obese” are good places to start:

The Center for Disease Control (CDC) defines childhood obesity as a formal diagnosis for any child with a Body Mass Index (BMI) in the 95th percentile or above.  That means that a child whose BMI is at or greater than 95% of the population for that child’s age group is considered obese.  Overweight is clinically defined as a BMI in the 85th percentile.  You can read more about these issues and calculate your own or your child’s BMI here.

“Even back then, it struck me as funny. We both knew I was chubby. I decided he had to be joking, so I just asked him again about Gilligan’s Island.

You can read about how common obesity is at the same website using this link.

We could go on. There’s lots of data to make your eyes glaze over.

So, let’s make this personal.

At the risk of making this seem like an Oprah special, I want to tell you that I was a fat kid.

I’m using the term “fat” because that’s what one of my best friends suddenly called me when I was 11 years old, while we waited outside for school to start.  He came to school different that day, his hair slicked back instead of his typical bedhead, and he was wearing a newly placed gold chain around his neck.  He had unbuttoned his shirt a few buttons until the teachers had made him button back up.

Until that day, he and I would spend recess pretending to be giant robots, lifting rocks and throwing them onto the ground, wreaking havoc on imagined hideouts of evil people who threatened the world with nefarious schemes.  That all changed on the day I want to tell you about, and it changed so suddenly that I recall it viscerally, like our friendship burnt down the way a house disappears in a four-alarm fire.

I literally remember the smell of the grass that day.

He arrived at school and I excitedly went to meet him, wondering if he’d watched the previous day’s episode of Gilligan’s Island.  I was so much in my own world that I didn’t at first notice his new look.  He turned his body slightly so as to avoid direct eye-contact and he took at comb out of his back pocket and ran it through his oiled down hair.

“What do you want, you stampede of elephants?”

That’s what he called me.  It makes me laugh today because it is such an entirely absurd thing to call anyone.  Think of the aeronautics your tongue has to do in order to say “stampede of elephants.”  That’s six syllables!

Even back then it struck me as funny.  We both knew I was chubby.  I decided he had to be joking so I just asked him again about Gilligan’s Island.

That was when I started to realize what he was saying.  I just looked at him.  Other kids had gathered around and were smiling.   This was the kind drama that attracted a crowd.

“What…what do you mean?”

That was all I could muster.  It was like I had entered an alternate universe.  Like I said, it was no secret that I was chubby.  But still, he was my best friend.  There had been countless sleepovers and movies and shared celebrations.  Now it wasn’t just that he was calling me fat.  He had made fat my unique identity.  I was the “fat kid.” He wasn’t using my name.

If you want to know the epitaph, I can tell you that I challenged him to a fight. I went from horribly hurt to steaming mad.  The whole class looked to recess with anticipation for our now properly scheduled scuffle, and when the bell rang we went outside and he offered me a wicked smile.

And he was right, of course.  I couldn’t catch him.  I spent the whole recess chasing him around, kids laughing, and the teachers, I’m certain, thinking that they were watching a playful game of tag.

Our friendship ended with the finality of a collapsed bridge.

Why go into all this?

Like I said, I can still smell the grass on that day.  I remember it like I remember the day I broke a limb.  It is a seminal event in my childhood.  And you’d be right to note that my ex-best-friend’s chiding did make me look at myself.  It played some kind of role in my time at the gym, and my changed and more healthy behavior at the dinner table, and even in the pride I took as my body changed.

But I’d trade all of that to have played more giant robots at recess.

Obesity is complex because it is culturally mediated, medically fraught, and emotionally wrecking.

Look, of course bullying will happen.  Of course kids will be bullied for being overweight. And of course its not OK.

But we can do something more than just stopping the bully.  We can help the person being pushed around.  Being heavy, after all, is no fun, and that’s even without the bullies.  Gym class is miserable when you’re overweight.  Riding a bike is awful.  Even running to catch the train or the bus is a dreaded chore.