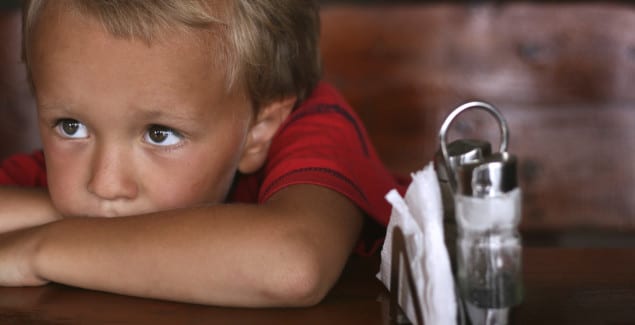 When the story came out about a family’s dining experience at Marcy’s Diner, I didn’t think much about it:

Currently, however, this is the story that a lot of people and parents want to talk about. So, here’s my take on the situation: from the beginning, I think that it has been over-publicized, and that social media has only added fuel to the fire.

Earlier this week, we learned (again and again) that the owner of a Maine diner became enraged to the point of going “crazy,” slammed her hands down on the table where three patrons were having breakfast, jabbed her index finger at a 21-month-old whose wails were increasingly deafening and uncomfortable for nearly everyone within a five-mile radius, and yelled at the toddler to stop crying.

Earlier this week, we learned (again and again) that overly-indulgent, overly-withdrawn, or perhaps even overly-nonchalant parents ate their toddler’s pancakes at a Maine diner, fed their child scraps as if she were a dog lucky enough to be welcome at the table at all, and ignored her whimpering and screaming such that what could have been a lovely, if lively, breakfast for the rest of the patrons, quickly became something akin to apocalyptic cacophony.

In other words, we learned about the same incident, told over and over, from increasingly polarized perspectives. Only the people in the diner at that time know what actually happened, so it isn’t fair to speculate one way or the other.

What do we know with certainty? Everyone has an opinion. That’s the one thing we can count on with us humans. (That, and our distaste for long nails dragged across chalkboards).

So, let’s start over. Let’s hit the reset button.

Let’s edit the adjectives, the expletives, the modifiers, and go over the situation again.

Earlier this week, a toddler cried loudly at a diner in Portland, Maine. The owner seemed angry, and forcibly thrust her arms down on top of the table, telling the toddler to be quiet. The toddler was quiet. And then, those involved took to their social media accounts, and the situation blew up as if we’d all just seen the Kardashians abducted by aliens.

You see, the court of public opinion has never been entirely fair—or entirely kind, for that matter. And now, thanks to social media and all of its minions, that same court of public opinion enjoys a practically endless array of jury members and audio and video evidence, as well as the added-if-not-planned utility of filling our insatiable need for news and gossip in the 24/7 media frenzy that could be deemed a thousand times worse than the sound of a crying toddler.

As a putative expert on child development, and someone who is therefore asked from time to time to proffer advice on parenting and the well-being of children, that same social media frenzy has now asked that I weigh in and perhaps take a side.

Of course I’m not going to take a side.

My 15-year-old daughter was done with this story in about 24 seconds.

“The parents could have taken their child outside of the restaurant earlier, and the owner could have been nicer. But it’s not that big of a deal either way.”

I keep struggling with something better than her pithy summing up of the incident, and I keep coming up short.

Here’s the best I can do:

Perhaps we can all just chill out.

I know that sounds like a tired and clichéd recommendation, but think of it like this: we live in world with all sorts of tools that seem explicitly designed to incite rather than to placate; to promote binding pronouncements rather than calmly-derived conclusions; to implicate our fellow citizens rather than grace them with the benefit of the doubt we all deserve.

I don’t know why the toddler was crying. I don’t know why the parents ate the pancakes the way they did. I don’t know why the owner acted in the way she admits to acting. I can imagine reasons for all of what I’ve been told happened, but that doesn’t mean I’m comfortable with what those reasons are. It just means that I will resist the pull toward absolutes. After all, we parents can get understandably “turfy” when we’re told how to act toward our children.

So, could it all have been handled better? Sure.

Is it the worse thing to ever hit Portland, Maine? Nah.

The less of a big deal we make about this one, the better. That’s the example we can set for our kids.