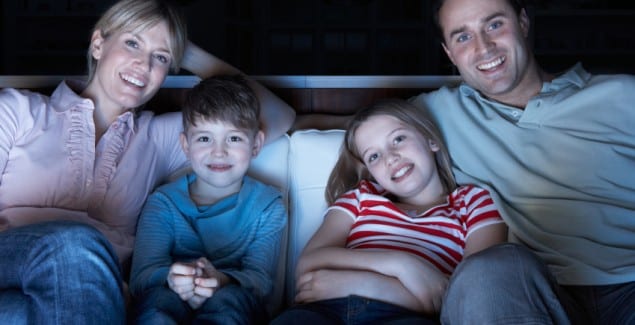 Posted in: Grade School, Hot Topics, Podcasts, You & Your Family

Good old-fashioned horror flicks are increasingly in vogue. They are rising, as it were, from the crypts of the back aisles in video stores to the front of movie theater ticket lines. The communal experience that only large screen cinema affords has reintroduced us all to the joys and camaraderie of being scared out of our collective wits.

Maybe it’s our desire to displace more contemporary anxieties. Certainly at the end of the day, there isn’t a whole lot on the screen that holds a candle to the tribulations of the real world.

But, to be clear, I’m thinking of horror as a special genre. I’m thinking of the giddy storylines that rely on the sturdy scaffolding that friendship affords. Plus, for my money, most good horror films have you smiling as you leave the theater because you knew from the start that what you watched was just that—a movie.

I’m thinking here especially of the classically redemptive horror films. These were the movies on which I cut my adolescent teeth—the movies that called for a second bowl of Crunch Berries on Saturday night. It seems these kinds of stories are back with gusto, and I suppose that my dual profession as a horror novelist (just one so far) and a (hopefully still respected) child psychiatrist has caused my patients and their parents to increasingly ask me:

“Doctor, can you recommend a scary movie that is appropriate for my 11-year-old?”

Music to my ears! But first, we have establish some rules:

An appropriate horror film for an 11-year-old must have the following components:

So, we’ve got the ground rules:

Given these rules, my recommendations, in no particular order, include:

Something Wicked This Way Comes (1983)

This Disney gem stars Jason Robards, and sticks very closely to the magic and nostalgia of the famous Ray Bradbury novel for which it is named. Without giving too much away, the movie is a shoe-in for any son who has ever doubted his father’s prowess, and for the corresponding strength of parental love. But, this movie ain’t The Waltons—there are scenes scary enough to make you wet your pants.

Again, based on a popular children’s novel, this movie features a fantastical world of humorous, powerful, well-meaning and sometimes evil creatures. The struggles of these magical beings become a proxy throughout the movie for the tension that the children experience in the setting of their parents’ unpleasant divorce. The last scene, when the son must confront what just might be his estranged father, is one of the most frightening movie moments I’ve ever endured. But the ending, the redemption, makes it all worthwhile.

This movie reminds me most of the scary movies of my youth. Who didn’t grow up near a spooky old house or building? Who didn’t pawn their fear off on the perceived oddness of the folks who reside in the spooky old house? And, at the end of the day, you can’t really beat an old-fashioned haunted house—especially if the ghosts of the house must, in the end, be vanquished by equal parts grief and love. Monster House is a lovely movie, and deserves far more attention than it has received.

Neil Gaiman is a treasure. Everything he writes has the uncanny knack for capturing our most primitive feelings, intertwined with our most admirable attributes. No one describes the imperfection of humanity as well as Gaiman, and the film version of Coraline is as beautiful to watch as it is frightening. It also features probably the most chilling line in all of childhood literature: “Everyone has an other mother.” Add to that a talking cat, a creature hell-bent on eating children’s souls, and a child heroine who is more frightened of her own parents’ indifference than of the ghouls in her closet, and you’ve got plenty of grist for the psychological mill.

Joe Dante brought us Gremlins about 20 years ago. His movie The Hole got held up with licensing problems in the States, and was just released about four years ago. This much I’ll tell you: any movie with a disgruntled teen finding a hole in his basement with no ending (talk about a metaphor for emerging adolescence!) is going to be fun. Plus, we have the spooky amusement park, and the cute girl-next-door. Also, I should warn: there’s a clown. Who isn’t afraid of clowns?

This movie is such a gem. The animation is fun, the writing is both fun and funny, and there are some genuinely scary scenes that at the same time manage to get across important points about bullying.

These are just a start. Do folks know of others? I’m always up for a good scare. Just remember to watch these with your kids—you may need them to cover your eyes when you get frightened.

Rise of The YA (Young Adult) Novel