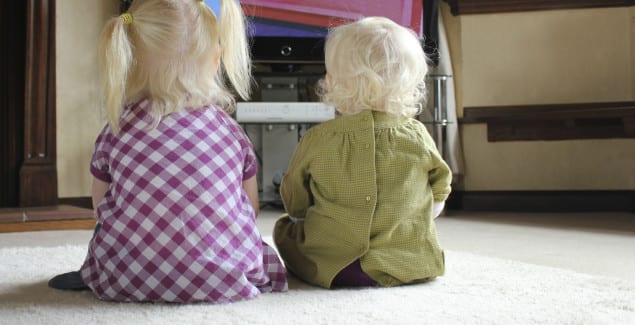 Here are three recent headlines that got me thinking:

Oversimplifications? Um, yes. Each of these headlines greatly simplifies (or even incorrectly simplifies) a critical social and health issue.

The medical community has long known that the amount of TV that a child watches correlates with obesity. We can even make a leap from this data and implicate causality. Unless your little ones happen to be doing aerobic exercises while tuning into their cartoons, it’s easy to see how passive watching can equal active weight gain.

However, be wary of oversimplification and especially the “one-size-fits-all” policy statements that these headlines often generate. The authors of the study here do, in fact, suggest further limiting TV exposure based on the existing American Academy of Pediatrics guidelines for young children as a means of controlling the rate of obesity in this country. Currently, the American Academy of Pediatrics recommends limiting screen time to 1 to 2 hours for children over the age of 2, and discouraging screen time altogether for those who are younger.

So, here’s the big question: Is the recommendation that TV time be further limited an entirely appropriate conclusion?

What we know for certain is that we can’t really discern from the headlines what we ought to do, though there is ample reason to believe that most Americans rarely go beyond the headlines. Thus, we run the risk of jumping to more draconian conclusions than might be warranted simply because we don’t have or take sufficient time to examine the flood of information.

How do we guard against this leap to oversimplification?

Here are a few key questions:

Was there a large and diverse population studied?

There have been solid links between lower socioeconomic groups and some ethnic minorities and increased television time, as well as between lower socioeconomic groups and obesity. The causes for both of these issues are, of course, multi-factorial. Fatty foods and higher-calorie foods are cheaper. TV can function as a babysitter in households where parents are busy working and living paycheck-to-paycheck. However, the study in the headlines above, conducted by the Department of Education in conjunction with physicians at the University of Virginia, was indeed both large and diverse.

Over 12,000 children starting kindergarten were enrolled in the investigation, and a year later, follow-up data was available for more than 10,000 of these children. This data included height and weight, as well as statistical analyses to account for differences in race, gender and socioeconomic effects. In other words, the numbers here are sufficiently large and diverse enough for us to feel comfortable drawing at least preliminary conclusions.

But always beware of flashy headlines. A Google search yielded all of the headlines above with equal weight, and yet one of the headlines clearly implicates causality: “Watching TV for Just an Hour a Day Can Make Children Obese”

However, this study does not in any way suggest causality. There are a number of other factors that also happen every day that might be ASSOCIATED with obesity, but not function as a CAUSE of it. These could include behaviors like taking longer baths cool down. We don’t know until we do the study whether longer baths would be associated with obesity, but we should resist the impulse to attribute causality if we conducted a study and happened to come upon this finding. In other words, always be wary of blanket statements of causality with regard to the complexity of human behavior.

What about the ample availability of screen-based material on-demand?

Perhaps the fact that children can often watch what they want when they want affects their activity patterns in negative ways. We could even ponder the fact that TV content, including content for kids, has arguably (though not in all spheres) gotten better and increased in quality. There is even evidence that TV watching can improve behavior in kids, and this evidence also comes from the American Academy of Pediatrics. Does that mean we ought to make a policy statement advocating that TV should be less compelling?

Things get even messier when we examine our own personal biases. In my case, that examination includes a shameless confession of the ways my own penchants might complicate my interpretation of this data. I use the word “shameless” here deliberately because there is no shame in admitting bias. In fact, there is greater shame, I’d argue, in acting as if bias does not exist. We’re humans, and humans are by definition biased. Any good interpretation of data requires an honest contemplation of what you, personally, have to gain or lose by the interpretations you draw.

In my case, I happen to LIKE television a great deal. I always have. I even remember liking television when I was in kindergarten and first grade. Star Trek was an hour-long program. Batman and Gilligan’s Island together made for an hour of TV time every afternoon. All the kids I knew growing up looked forward to the ritual of coming home from school, enjoying a shockingly unhealthy snack, and settling in for some afternoon TV. It was and in many ways still is part of our culture.

Those stories that I saw on television deeply affected me—my current avocation as a writer is based, without question, on what I watched on TV. In order for me to come to terms with my own biases, therefore, I need to find out whether things have changed since I was a child. After all, if people are watching more TV, and if weight is, in fact, increasing, then maybe I was just lucky not to get heavy despite watching more TV than was average for my cohort 40 years ago.

This means we have still more important questions left to ask.

Was there the same rate of obesity among children 40 years ago as there is today?

According to many studies, including this excellent summary commissioned by the non-profit organization Future of Children, obesity has markedly increased in children worldwide over the last few decades, and especially in Western nations.

This study implicates sedentary activities like watching television while simultaneously emphasizing the incredibly complex maze of social issues that might be causing, or be associated with, this change in childhood weights. In other words, children have been getting dangerously heavier over the last few decades for many reasons, and TV may be only a small part of that puzzle.

Are kids watching more or less TV than in the past? If obesity and overweight children are related, we’d expect the amount of TV watching to increase as the rate of obesity increases as well. In 2009, the Chicago Tribune reported that “Kids [Are] Watching More TV Than Ever.” There is also data to show that fussier children watch more TV, though it isn’t clear whether the TV makes them fussy or whether their fussiness leads to them watching more TV. Finally, there is 2009 data from Nielsen that toddlers are watching more television than in past decades.

On the other hand, there is also data showing a modest decline in television viewing by young people. A piece from The New York Times in 2012 suggested that the rate of TV watching among toddlers was falling.

So, we can conclude, depending on what studies we read, that children are watching less or watching more TV, but we can say with relative certainty that kids are steadily getting heavier.

All of this leads to the really big questions: What should we do about this? Will taking away the TV reverse the problems with obesity and overweight children?

Taking away the TV might help accomplish this goal, but it is also not an entirely practical solution. Screen availability is a function of modernity. There are also those findings that show benefits from watching television and other forms of on-screen programming.

What’s our advice? Take the guidelines with a grain of salt. Data can be contradictory and multi-faceted. If your child is active and healthy, an hour or even two of TV a day is probably fine. If your child spends all day in front of the TV or any other kind of screen, then it’s probably time to set some limits.

Most importantly, go to the source and don’t rely on press releases or study summaries of new findings. Raising a child is complicated and unique to each family. It is only through a careful sifting of as much data as possible that we can comfortably jibe our own values with the guidelines that emanate from our studies.

I was genuinely changed (for the better, I’d argue) when I was young and had the privilege of watching Gilligan’s Island while enjoying Oreos and milk. For other kids, however, this practice might not have been such a good idea.