What Sitcoms Like “Full House” Tell Us About Family

What Sitcoms Like “Full House” Tell Us About Family 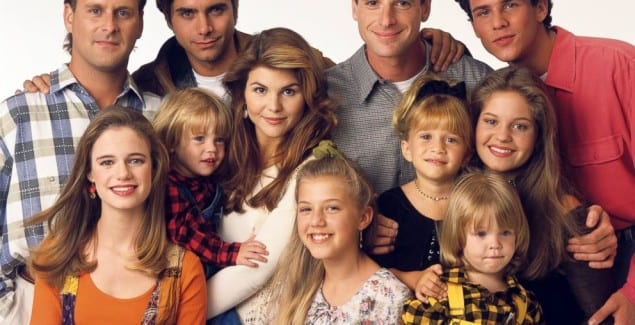 I’m going to say a word, and you’re going to say the first thing that comes to mind. And yes, I know I didn’t invent this game. But just humor me. I’m a shrink.

If, from 1987 to 1995 you lived in the U.S., your brain was big enough for you to speak, and you had access to a television, what’s the first thing that comes to mind when I say these words:

Or how about “John Stamos.”

I haven’t done this exercise as a formal study, but I’ll bet you dollars to doughnuts that at least three-quarters of you blurted out “Full House”—even if you didn’t want to.

That show, a weekly 23 minutes of chaotic and cutesy hi-jinks in which a widowed and lovable father attempted to raise three daughters with the help of his brother-in-law and best pal was enormously, fantastically, and, some might argue, improbably popular. I was finishing up college and then stumbling through medical school when the show had its run, and though I must say that I wasn’t overly fond of Full House (don’t hate me!), I also found myself oddly powerless to turn it off whenever my exhausted perusal of the remote landed me in that lovely townhouse in San Francisco.

Full House was pretty standard stuff, and so as a child psychiatrist and a bit of an expert on popular media, I am therefore baffled by the show’s bewildering tendency to bewitch me and about a hundred million other Americans. Turn on Full House and I would go, as if under a spell, to a saccharine place that might as well have been peppered with rainbows and unicorns. The show was just plain sappy (in my humble opinion), and yet, I couldn’t help but watch it.

This begs all sorts of questions. Why did the show last so long? What was its appeal? Was there a strange drug that emanated from the television whenever it began? We can only speculate.

As Netflix introduces today Fuller House, a revamped sequel, it’s worth taking another look at the original show itself.

First and foremost, the show was about family. Shows about families are nothing new in television, and they have often been wildly successful; consider Eight Is Enough, Little House on the Prairie, or The Jeffersons. The American family is a fundamental institution that we all readily recognize. That means that families lend themselves to certain storylines that don’t take a lot of build-up. Thus, even with more modern shows like Modern Family, we readily grasp the narrative arc. You can’t get too complicated in 23 minutes; that’s why a family show is so easy. We know what we’re seeing even before we see it.

But, that’s also what allows family shows to capture us so completely. The “Great American Sitcom” often features some kind of family, and, given our brains’ predilections for pattern recognition, we might tune into these shows for the universality that the family narrative frequently and recognizably affords. In other words, the strength of Modern Family isn’t necessarily that there are two gay men raising a daughter—though the show it definitely to be lauded for introducing this mirror of our changing culture. The strength of Modern Family lies in the fact that, despite the apparent differences in family dynamic, the dilemmas of the main characters are more similar than different than those of the protagonists in much older programs like Father Knows Best or Leave It to Beaver.

This is where Full House was sneakily prescient. Sure, I’ve given the show a hard time for its overly simplistic plots and characters. But it was also a show that, in 1987, managed to show typical American values in fairly atypical setting. At that time, we were just as a culture getting used to the fact that a traditional family could break with tradition. We had “edgier” shows like One Day at a Time (in which a single mom struggled to make ends meet while raising her two teenage daughters), or a bit later, the surprisingly profound Party of Five (in which five siblings were orphaned and chose to raise themselves); but, at the end of the day, no matter how much the family configuration was or is changed, the central messages remain constant.

Families mess up. Families miscommunicate. And, families also make up.

Families, when they work, do their best to love each other.

That sounds pretty saccharine. Did I just create my own unicorn-like conclusion?

The American family is changing, and the original Full House, though hardly a provocative show, served its part in the long canon of TV in which families in all shapes and forms bumble through the day and get by. After all, at our best, that’s what we do in the real world.

And, I’ll bet you dollars to doughnuts that’s what the new Fuller House will do as well.