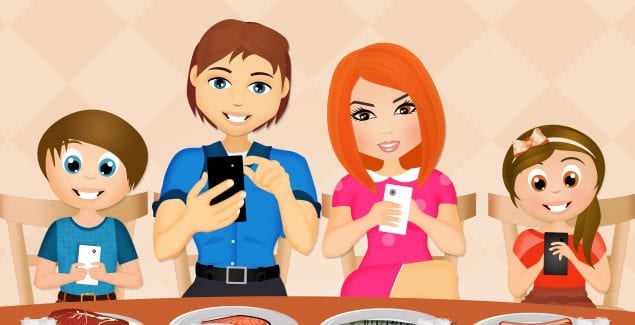 If you were born more than a couple of decades ago, the chances are pretty good that you’ll remember the family dinner where there were five conversations at once.

“I got a lousy grade in math today,” you might have said.

Your little brother, seemingly in response to your attempt at confession, added this helpful statement:

Your mother might have tried to bring things back around.

“What grade DID you get?”

“It doesn’t matter,” you try hopefully.

Your little brother then might have asked for the ketchup.  Ketchup makes everything better.

This was a typical dinner.  No one really questioned it or even actively valued it.  That’s just the way it went.  And of course, it wasn’t like this every night.  Maybe sometimes everyone watched a movie.  Maybe sometimes someone was out with friends.  But families talked at dinner.  That was relatively consistent.

Today, however, we have phones.  This isn’t meant as an ode to the good ol’ days; you’ll have to draw your own conclusions about how good these days actually were.  Still, we know that for at least the last ½ decade, families are much more likely to sit silent at the dinner table.  We’re reading the news on our phone.  We’re looking at homework on our phones.  We’re flirting with our friend on our phones.  We’re watching a ballgame on our phones.

We’re having dinner, with our phones.

“Certainly, smartphones and tablets are an important part of our lives today, but they need to be used judiciously.”

The world has changed enormously since the advent of the smartphone.  People in the same room often don’t talk to each other, but prefer to communicate through technology. Your kids could be home with you and text you rather than talk to you.  If you have a voice-controlled speaker in your home, like Alexa, perhaps your kids direct their everyday questions to the speaker, instead of to you. “Alexa, is it gonna rain again today?”

And to be sure, there is a streamlined utility to these changes.

The most efficient and reliable way for us to keep in touch with kids and grandkids is through texting.  This works because we get a near-immediate response.  There aren’t really any details and of course we don’t hear the sound of their voices.  The phone is like an extra limb.  It’s an extension of ourselves.

According to a September 2017 article in The Atlantic by San Diego State University Psychology Professor Jean Twenge:

“The arrival of the smartphone has radically changed every aspect of teenagers’ lives, from the nature of their social interactions to their mental health.  These changes have affected young people in every corner of our nation and in every type of household….Significant effects on both mental health and sleep time appear after two more hours a day on electronic devices.”

Twenge’s research also suggests that teens today are a lot less likely to go out, have less interest in driving, and feel lonely. Rates of depression have increased.

Twenge isn’t the one with concerns.  A recent survey conducted by Common Sense Media showed that nearly 80% of teens checked their phones hourly and 72% said they felt the need to respond immediately to texts and social media – even at night, often interfering with their sleep. At this point, it makes sense to recall that sleep deprivation has long term consequences for both physical and mental health.

Research and survey data connects the amount of time spent on social media with loneliness, depression, suicidal thoughts and sleep deprivation.  Kids are not getting enough sleep because they have their phones in bed with them and are responding to texts and social media.

Certainly, smartphones and tablets are an important part of our lives today, but they need to be used judiciously.

Here’s what we as parents and guardians can do.  Much of this will sound like common sense, but be honest with yourself.  We humans have a long history of ignoring common sense when the reward is high enough.  Knowing things immediately is a pretty potent reward for big brains like ours.  So, with full disclosure of our guilt, here are some friendly reminders:

We can’t turn back the clock, and I don’t think we want to.  Smartphones and tablets are amazing.  It’s pretty clear, though, that we have to get better at using these devices in the best possible ways. We’ll figure out how, but we have to be active in this endeavor.  Otherwise, we stop owning the technology and it starts to own us.

Marilyn Wilcher, senior director of the Benson-Henry Institute (BHI), has been associated with the Institute since its founding in 1988 as the Mind Body Medical Institute — first as a trustee and later as senior vice president. During these years, ...