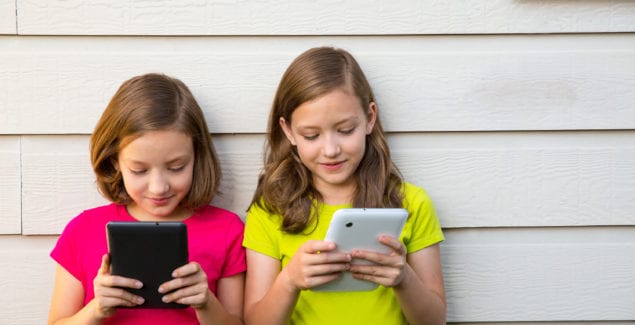 We are now in what I believe is the 19th annual “Screen-Free Week” in the United States and abroad. This is a much publicized and highly laudable movement that asks us to take a week—an entire week—to get our children to unplug whatever they happen to own with a screen. And don’t get cute here; if the device is battery operated, it’s also fair game. It isn’t about the plug specifically.

The point is to look beyond the screen.

Do you recall that funny and sad moment in Wall-E (a movie, by the way, that you can watch on a screen; I’ll get back to this paradox in a moment) where the obese survivors from a dead and ruined earth happen to fall off their floating chairs in the wandering spaceship, and realize that there is a world beyond what they’ve been seeing on the screens mounted in front of them?

Wall-E is a powerful movie, and that scene is one of the reasons why I have stated in previous interviews and forums that Wall-E is the most realistic post-apocalyptic film. The dismal feeling at that moment in the film isn’t that the earth is gone; the dismal feeling is that we didn’t even notice it was gone because we were too busy watching reality television and engaging in social media.

Without question, there are a lot of good reasons why we should help our children to turn off their screens. Obesity, laziness—even neurobiological stagnation—have been implicated in various ways by our growing obsession with screens, and the sedentary behavior that they provoke. In fact, that very sentence begs an important question: Why do we need to help our kids turn off their screens? Why can’t we just say, “Hey Billy, why don’t you take a week away from the TV, computer, phone, tablet, smart watch, etc.?”

And Billy will look at you with a confused expression, and then with an angry expression, and then maybe with one of those expressions he’s seen in his video game when the main character notices that behind him is a big, gnarly demon, and he doesn’t have enough “health points” to survive the inevitable battle.

In other words, Billy will probably resist.

And there are lots of reasons why. I think we can sum up his resistance in three main points:

For these and many other reasons you could find by using Google (on a screen, by the way), it’s oddly and paradoxically “unnatural” to switch off our electronics. For some, it can feel bad before it feels good—and that’s if it ever feels good at all. Remember that kids are connected to their friends through these screens. Those connections are real.

I’m not so sure that the “ripping off the BAND-AID” approach is the right fit for every child. In that spirit, I’d like to be a little bit subversive in this article—an article, by the way, that you are most likely reading on a screen.

What’s In a Screen? Finding the Middle Ground

Let’s start with the somewhat draconian nature of the screen-free mandate. What are some of the other “vices” that we might pledge to forgo for a week? There’s chocolate for some…or reaching out to a toxic friend or partner. Alcohol and drugs definitely make the list. Even a week off from exercise is advised for those who exercise dangerously frequently.

In other words, we advise a week off—either through social campaigns or clinicians’ suggestions—from those things that we think are fundamentally “bad” (or that are being done to the extent that they are fundamentally bad). Chocolate is not, as a rule, bad. But, seven or eight bars of chocolate a day would draw universal concern.

Too much of anything is probably too much. I recognize that this kind of extreme sentiment is exactly the tone that I am trying to call into question when I challenge the extreme nature of “Screen-Free Week.” But, because kids are excessively and impressively logical with regard to parental decrees that go against their wishes, be prepared for this argument:

“Billy, guess what? We’re going to turn off our screens for a week…starting tomorrow at 9am.”

Billy, who has seen similar types of interventions on a reality show called, ironically, Intervention, will respond something like this:

“Um, Mom, isn’t that the kind of thing we ask people to do when they have problems like marijuana addiction?”

“Yes,” you will reply hesitantly.

“So,” Billy will say, “Why do you let me go back to screens in a week? Would you let me do that if I were addicted to marijuana?”

And then you will try to explain that just as with exercises in abstinence toward controlled substances, we pick a small amount of time so that people can face the week without the thought of never again having their drug.

Except that this “drug”—this “screen time”—is everywhere. Now you have equated screen time with addiction (which, as we note above, is not outlandish), and if you go down that road, you’ll have to explain why you and your spouse watch Game of Thrones with near-religious devotion. This is a complicated route, one where you don’t dare to shut off your kid’s screens without shutting off your own. Hypocrisy is the most potent tool in the teen brain’s rhetorical prowess.

And, let’s not forget to talk about screens themselves—or more importantly, what’s on them. Violent video games are seen as both cathartic and inciting. In fact, numerous studies continue to question, as well as support, convincing links between both beneficial and dangerous effects of violent video games and child behavior.

But do parents know the stories behind these games? What I mean is, do you know, or do you appreciate, the intensely complex and archetypal narratives that form the platform for games like Halo or Fallout? Look them up and discuss them with your kid. If your child has a creative bend, there is no way she’ll not be inspired by the creativity inherent in the video game industry. Kids are even writing and directing their own home movies based on these games; there’s some amazing stuff to be found on YouTube. What a great way to connect with your child—through the stories that she enjoys.

I’ve written prescriptions for television shows, and I learned this from my mentors during medical training. These mentors were quick to denounce the excessive consumption of television among some of our patients, but they also recognized that certain shows could bring families closer together. These themes could also translate to video game narratives. The things that make for good storytelling are also those that families often have a hard time discussing. However, move the discussion into displacement, and you’ll get the family talking. We’re much more likely to talk about the corruption inherent in bullying when we watch episodes of West Wing than we are when we ask our children about the bullying they see at school.

And we must discuss my current favorite screen phenomenon.

My youngest daughter loved Minecraft. At 10 years old, she built whole worlds on this platform. She taught me how to build things as well, though much of this was actually to witness how bad I am at it. When her friends were over, sometimes they’d play on Minecraft while sitting side-by-side at computers. They’d then get antsy, and move into the living room to build a fort. The resulting fort was so incredibly complex, that I can’t shake the notion that they were making real in my living room what they’d done on the screen. It was like being a modern architect. And, I’m not the only one to laud games like Minecraft; teachers and researchers have been quick to accentuate the benefits of this unique on-screen experience.

I could go on, but you get the point.

Screens aren’t necessarily the same as marijuana, an abusive partner, or any of the other things we promise ourselves we’ll take a break from. Your best bet is to know what your child does on his screens. Or, even better, to be involved in what he does on his screens. The goals of “Screen-Free Week” are still inarguably good:

This might already be happening with the screens themselves. If that’s the case, don’t stop. And if that’s not the case, make sure the screens aren’t the culprits. Get involved. If the screens go off for a week only to come back on again, and you as a parent haven’t shown an interest in what they actually have on them, the wonderful goals of “Screen-Free Week” will have been lost. Talk about an unintended consequence! Embrace the goals of “Screen-Free Week,” but question the methods. Being connected is what counts—on or off-screen.

iPhone In The Baby Bag

Do As I Say, Not As I TXT: Tips for Parents to Manage Technology Use at the Dinner Table