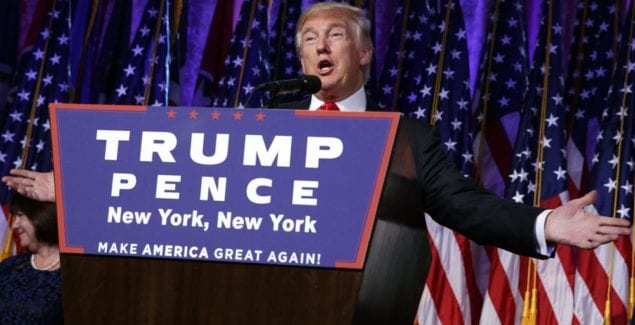 Elections are, above all, political moments; but, each one offers parenting moments as well. That is certainly the case with this one. Last Wednesday, one Boston-area mother told our friend Carey Goldberg, the co-host of WBUR’s CommonHealth blog: “My son has been very worried about Donald Trump, who he calls ‘the bully.’ I’ve been telling him not to worry, that the bully won’t win.”

What could she tell him now?

For about half the country, Trump’s victory was cause for celebration. For many in the other half, it was a source of shock and trepidation—so much so that Boston school administrators offered post-election counseling and support for the city’s young people.

Our own Dr. Gene Beresin had a colleague text him that her 5-year-old daughter “woke up petrified” Wednesday because she was convinced—apparently by kids at school—that Trump would make her leave the country because of her brown skin.

How to respond? Dr. Beresin and Dr. Steve Schlozman begin with reassurance: “This is not the Hunger Games,” Steve has been telling his teen patients in recent weeks, in sessions that he says sometimes sound a bit like civics class. Dystopian apocalyptic stories are fun to read and watch, he’s been telling them, but they’re not helpful in the real world.

“So, I help kids remember that the sun will come up,” he says (and he was using that phrase even before President Obama did). “People will go to school, and there will be jobs.” He has also been talking about checks and balances, and about the limits to presidential power.

For younger children, the message may be as simple as “reminding them that things are going to be OK,” Steve says. “Often, that’s all younger kids need to know.”

Remember that kids get more from the furrows in your brow than they do from the words that come out of your mouth. That means that you should reassure them, but that you can also show them your emotions around this election. If you’re bummed out, you can tell them that. And, if you’re not disappointed, by all means, let them know that you’re glad about the results.

The great thing about our system—and you can tell kids this because they’ll understand the concept—is that, in an election, someone wins, and someone loses. It’s that decision that allows us to get things done. We can be happy or sad about who wins or loses, but we don’t do our kids any favors by acting as if their world is going to change overnight. Remember: their world already changes overnight—every night. They have enough change to deal with just by growing up.

If they see that you look worried, and if they themselves look concerned, you can say something like, “You’re right, I am a little worried. But, these are adult worries. We’re fine, and I promise to tell you if that changes.” Then, always remember to follow up with, “Do you have any questions you want to ask me?” This is a chance to model civility, empathy, and connectedness. That’s as good a lesson for life as any.

And, what about children who may feel particular fear because they belong to categories targeted by Trump’s campaign rhetoric? Gene suggests explaining that many people, even prominent people like Trump, are afraid of people who are different from them. They don’t understand that when you’re afraid of someone who’s different, “It really means that you need to get to know them—and to understand that we are all different.”

Jennifer Tsappis, a psychiatric social worker on Boston’s North Shore who specializes in kids, agrees that this may be a moment to emphasize empathy—and to explain why some may lack it. In a blog post titled “Helping Your Child Cope With Post-Election Worry And Anxiety,” she writes:

In addition to the material offered by Carey Goldberg, we at The Clay Center would like to share a few additional thoughts.

A version of this post originally appeared on WBUR’s CommonHealth.